The eclectic lives that lived atop Carnegie Hall 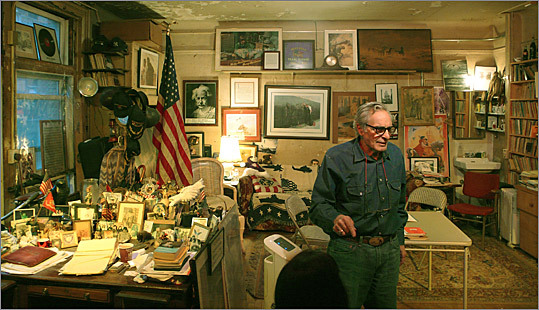 ‘Bill Cunningham New York,” last year’s most winning documentary, had a real estate subplot. How could a movie with New York in its title not have a real estate subplot? It concerned the eviction of the film’s subject, the celebrated New York Times fashion and society photographer, from his apartment atop Carnegie Hall.

Cunningham wasn’t alone in having to look for a new apartment. The nonprofit Carnegie Hall Corporation had announced plans in 2007 to remove the residents of the 165 apartments above the concert hall. They had been built in 1895, four years after Carnegie’s opening, for the express purpose of housing artists. So they were designed with skylights, high ceilings, large windows, and other features that suited them for painters, dancers, musicians.

Cunningham is one of several colorful characters who appear in “Lost Bohemia,” a documentary made by fellow resident Josef “Birdman” Astor. Or fellow former resident: That first word in the title tells you the outcome of the corporation’s efforts. Astor’s film functions as both an engaging introduction to a small community of eccentrics — “a secret bohemian village,” one resident calls it — and an impassioned chronicle of the struggle by the residents and their friends to keep their homes.

We meet Editta Sherman, a portrait photographer in her 90s, who also figures in “Bill Cunningham New York.” A recently deceased neighbor of Astor’s had a church-sized pipe organ in her quarters (he had always assumed the organ music he heard came from concerts in the hall). Robert Modica, a gravel-voiced acting coach, conducts classes in his apartment. John Turturro, a former student, shows up to help protest the evictions. Another resident, Rosemarie Lindt, runs a ballet school in her apartment. When she learns about a homeless woman who practices ballet in one of the building’s stairwells, Lindt enrolls her on scholarship. The woman, Star Szarek, is like a little bird in her leotard and toe shoes. It’s as if she’s flown in from a fairy tale — or into one, assuming fairy tales can have peeling paint and end in litigation.

Some of the Carnegie dwellers had lived there for half a century or more. It’s wrenching to see these people, many of them elderly, confronted with the prospect of having to move. That said, there’s an increasing sense of unreality, and not the fairy-tale kind, in seeing individuals who live in fabulous residential spaces in midtown Manhattan and assume their location there is secure. The residents are charming, but not charmed. There’s entitlement, though, and then there’s entitlement. One of the film’s closing credits reads, “The Carnegie Hall Corporation declined to be interviewed for this film.”

At: Museum of Fine Arts, Thursday and various dates through June 27