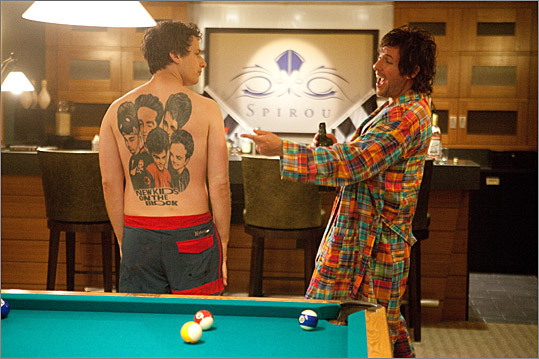 The premise of “That’s My Boy” is ludicrous, which is fine.

As a Somerville (wicked!) middle school kid in the 1980s, young Donny scored with his teacher and got her pregnant. She went to prison (a page right out of the 1980s Pamela Smart case) and he raised their son, solo. Actually, make that Han Solo, since that’s what this “Hot for Teacher” kid decided to name his boy. Then Donny rode his own wave of celebrity. For a while.

Now all grown up and down-and-out, adult Donny (Adam Sandler) is living on a prayer. He drives a beat-up car emblazoned with a Rush emblem and cranks the tunes from his cassette deck. Meanwhile the adult Han Solo (Andy Samberg) is a financial whiz kid renamed Todd, who is so emotionally scarred that he’s never without a second pair of underpants. Todd has disowned his dad and is about to be married to Jamie (Leighton Meester of “Country Strong”), which will usher him into the picture-perfect world of investment banking and summers on the Cape.

The clanking plot device bringing these two worlds together is a debt Donny owes to the IRS, payable if he can arrange a mother-son-father jailhouse reunion for a local reality TV show. Enter wedding-crasher Sandler, arriving at Todd and Jamie’s nuptials spouting a wicked Boston accent and a Ric Ocasek rocker hair mop. Whassup?

We’ve seen this sweet doofus before, in everything from “Billy Madison” to “Happy Gilmore.” This time, Sandler wages class war with his wild-mouthed antics, getting stuffy rich folk to lighten up. He’s the underachieving underdog with a heart of gold, winning over doubters by arranging a last-minute strip club bachelor party. Beer can constantly in hand, Sandler selfishly devours every scene with a squirm-worthy Bah-ston caricature (though locals might cheer seeing “Somerville Middle School” in the opening flashback).

Oddly, Samberg is cast as the nerdy-OCD straight guy, a role that requires little of his comedic talents. Samberg recently announced his departure from the career launch pad “Saturday Night Live.” We know he’s a much smarter actor than the material he’s given to work with in this movie.

Sadly, “That’s My Boy” relies on caricatures, rather than characters, to make you laugh.