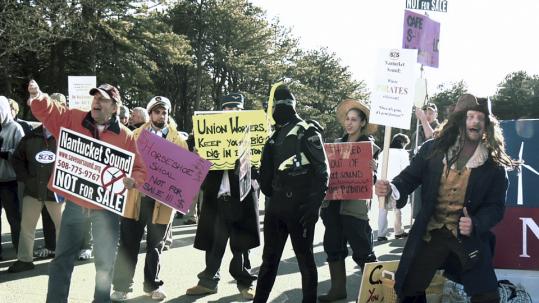 BROOKLINE — One can only imagine what Mark Twain would have said if he had been able to watch “Cape Spin: An American Power Struggle,” the new documentary on the decade-long battle over whether or not a wind farm should be planted in the ocean, 5 miles off the coast of Nantucket.

It’s a safe bet he would have dragged out the famous quote associated with him about there being three types of untruths: “lies, damned lies, and statistics.” He might have added a fourth: spin.

In “Cape Spin,” directors Robbie Gemmel and John Kirby share the story of how two small advocacy groups backed by some pretty deep-pocketed supporters spent an estimated $70 million from 2001-2010 lobbying the public, the government, and the press over the pros and cons of the proposed wind farm near Horseshoe Shoal.

“I had been following the Cape Wind controversy since it was first proposed in 2001, Gemmel said. “And I quickly realized it had the ingredients for a fantastic documentary: passionate, powerful, fascinating characters, hot topic, high stakes, based in a gorgeous location.”

Gemmel, who graduated from Emerson College in 2003, had been working in documentary film production before he took on the role of director on the Cape Wind project. The film cost $750,000 and generated 550 hours of footage. In the end, Gemmel said, he was most surprised not by the wind farm debate but by what he learned about other ways electricity is produced in the United States and how ignorant most consumers are about the subject.

“For instance, I was shocked to learn that Eastern Massachusetts gets 50 percent of its energy from coal, and the majority of that comes from two mines in Colombia,” Gemmel said.

“Cape Spin” looks at the people involved in Cape Wind, pro and con.

Pushing the farm: energy entrepreneur and Cape Wind CEO Jim Gordon, who sought permission (and ultimately won it from the US Department of the Interior, in 2010) to install 130 wind turbines.

Supporting the farm: advocacy group Clean Power Now, led by Barbara Hill. CPN and other Gordon supporters argued that the turbines would generate enough electricity to lower utility bills across Massachusetts and provide 75 percent of the electrical energy requirements for Cape Cod, Nantucket, and Martha’s Vineyard. Further, supporters argued, the turbines would be efficient and easy on the environment.

Opposing the farm: Audra Parker, CEO of the Alliance to Protect Nantucket Sound, a group that counts among its funders William I. Koch, the industrialist and conservative political activist who summers in Osterville. Parker and her supporters argued the turbines were unsafe for wildlife and aircraft, would harm the environment and the fishing industry in Nantucket Sound, and would ruin the view from the coast.

More interesting than the subject the groups fought over is the manner in which they make their arguments, as portrayed in the documentary: often spinning or manipulating “support” data, sometimes spinning the exact same data to starkly different conclusions.

“We set out to show it all, not just the complexity of the debate but the passion and even the absurdity that went into some of the arguments,” Kirby said, following a recent screening. “The story really is how both sides make their case, how they see and present their sides.”

Gemmel, who began making “Cape Spin” five years ago, agrees it is the story “of the story, of a story.”

“As humorous and maddening as it is in some cases, I think what we learned from this is when people are extremely passionate about a topic, and when different sides mean well, perceptions of truth can vary,” Gemmel says.

To be sure, the film is exasperatingly funny, as it features politicians who often exhort the public to embrace “green” energy projects such as wind farms — but who also happen to own homes with ocean views of Nantucket Sound — arguing against the project. And there are the wind farm advocates in the film who are determined to make the fight one of class — rich vs. poor or rich vs. middle-class working stiff — even though there are plenty of folks in different income brackets on both sides of the debate.

News outlets, including The Boston Globe, published contradictory editorials, supporting and opposing the project. Reporters lamented being “spun” by both sides.

Even Jon Stewart got in on the action, sending Jason Jones, a correspondent for “The Daily Show With Jon Stewart,” to the Cape to investigate. Predictably, Jones made fun of both sides, with a little more snark reserved for the anti folks.

Parker, who attended the Brookline screening, saw no humor in the issue, and pointed out that parts of the approved project have already been held up in court over “legitimate questions about the data used to make the approvals in the first place.”

“One area [of dispute] is air travel,” Parker said. “Very fair questions have been raised about the safety of having a wind farm, such a large wind farm, in a busy flight path.”

“It really says something that even now, nearly two years after the project was approved by the federal government and backed by the state, it’s not fully clear what the costs will be and what the savings will be,” Gemmel says. “So I guess the debate continues.”