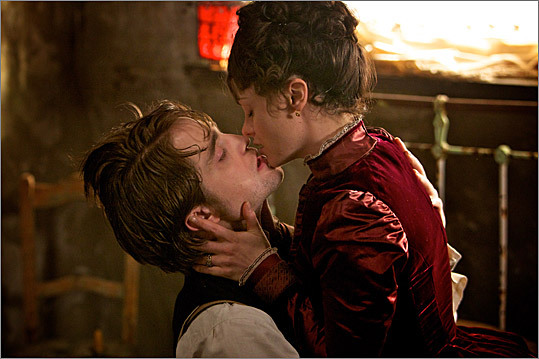 Robert Pattinson isn’t all that bad in “Bel Ami.” He just isn’t right.

If the “Twilight” heartthrob faces an uphill battle to prove his relevance and range as an actor, this adaptation of Guy de Maupassant’s 1885 novel stands as an acceptable career move. It’s lavishly produced and smoothly directed, an opulent period drama about the rise of a rake in pre-Belle Epoque Paris. Screenwriter Rachel Bennette doesn’t come close to capturing the dry sting of Maupassant’s prose, but she has crafted a very watchable melodrama — something like “Dangerous Liaisons” a century later and with half the danger.

Underlining the connection is the presence of Uma Thurman as one of the many women Georges Duroy (Pattinson) beds on his path to the top. Where Thurman played a teenage naïf in 1988’s “Liaisons,” she’s now cast as Madeleine, the smart, experienced wife of Charles Forestier (Philip Glenister), Georges’s army friend and editor of the muckraking newspaper La Vie Francais. When the film begins, Charles meets the down-and-out Georges at a bordello and offers a leg up, observing that “Paris is filthy with money. Even the whores are getting rich.”

And Georges is willing to whore himself, first to a bored married woman, Clotilde (Christina Ricci, touchingly good in an unexpected role), then to Madeleine (who turns out to be the brains behind both her husband’s and lover’s successes), and ultimately with Virginie (Kristin Scott Thomas), the neurotic wife of the paper’s brutish publisher (Colm Meaney).

Written in a tone of highly amused disbelief, “Bel Ami” is a demonstration of how the talentless can prosper in an amoral society. On the surface, Pattinson seems perfect for the part. Hold your snickers; the kid can act — just — and he has the cold handsomeness needed for this “beautiful friend.” But he doesn’t have the years or experience that fuel Georges’s class rage, and there’s no devil in his soul. The character isn’t as smart as he thinks he is, but he doesn’t need to be — he just needs to keep his eyes open and use everyone he can. Pattinson’s Georges seems content to be used.

The part needs a touch of the bastard, someone who has been around the block. You can imagine a young Jack Nicholson or Robert Downey Jr. having fun with it. With Pattinson, the emphasis is on the young, and the best the actor can muster to express Georges’s cynicism is a semi-permanent sneer. Thurman’s Madeleine would have him for lunch and very nearly does.

“Bel Ami” is the first feature from co-directors Declan Donnellan and Nick Ormerod, better known for over three decades of stage work with their international theater company, Cheek by Jowl. The film’s extremely professional and a little hesitant, and it leans much too hard on a swooning score by Rachel Portman and Lakshman Joseph de Saram. Aural wallpaper, the music overwhelms the movie without ever filling the hole where a scoundrel should be.

based on the novel by