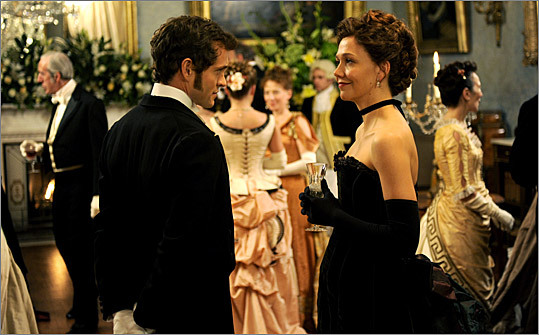 Something is abuzz in Victorian-era London. Proper upper-class ladies have been seen entering the establishment of Dr. Robert Dalrymple (Jonathan Pryce) in a state of nervous agitation and emerging, 30 minutes later, flushed with relief. The good doctor’s radical massage techniques are said to be particularly efficacious in fighting hysteria, the common women’s complaint believed to stem from an overactive uterus. There are even rumors that the handsome young assistant, Dr. Mortimer Granville (Hugh Dancy), has been experimenting with an electric massage machine.

Just so you know, whatever’s going on here, it’s not about sex.

Somewhere in “Hysteria,” there’s a cheekily illuminating cultural comedy about a trussed-up society racked by urges it doesn’t dare name. So why does director Tanya Wexler insist on stamping it out with moralizing? The screenplay, written by Stephen Dyer, Jonah Lisa Dyer, and Howard Gensler, is based in truth: Yes, Virginia, there was a Dr. Joseph Mortimer Granville, and he did invent the electric vibrator in the 1880s, even if he probably wasn’t the naive swain portrayed here. The film’s actual subject, though, is the world in which Mortimer prospers: a repressed patriarchy ridiculously blind to what women want, need, and enjoy.

The problem with “Hysteria” is that it keeps patting itself and us on the back for knowing better. Victorian England is portrayed as a place of filth and finery, where the medical establishment still uses leeches and scoffs at “germ theory,” where women and the poor are expected to know their places, and orgasms are only for men. For all their forward thinking, Drs. Dalrymple and Granville are very much of their time, the former a stuffy social climber, the latter a prim idealist with his eye on Dalrymple’s younger daughter, Emily (Felicity Jones), a poised beauty with expertise in the piano and phrenology.

There’s a scandalous older daughter, Charlotte (Maggie Gyllenhaal), who’s meant to be a modernist anchor of sanity — our representative from the land of Common Sense. Charlotte’s a self-styled suffragette (even though the word wasn’t coined until the 20th century), advocate for the poor (she runs a halfway house in the slums), and, it’s implied, an exponent of free love who knows full well what’s getting her father’s patients off.

Charlotte is meant to be the film’s free spirit, but she’s a pedantic bore, lecturing Mortimer that “after I’m gone, women will have the vote, equal education, and the rights over their own bodies” with a self-righteousness we’re meant to share. (Gyllenhaal made a better case for sexual bliss, and with less grandstanding, in 2002’s “Secretary.”) The film’s climax (you should pardon the expression) is a thoroughly cooked-up trial scene in which Charlotte speechifies while Mortimer and the rest of 19th-century London fall at her feet.

Sorry, not buying it. Don’t the filmmakers know that showing, not telling, is the way to moviegoers’ hearts and minds, and that overlaying modern values on period characters only results in contempt for everyone? “Hysteria” is equally self-satisfied but much more convincing (not to mention funny) when it depicts Dr. Dalrymple’s practice: genteel ladies with their nether regions hidden under a weird tent-like apparatus thrashing happily about while Mortimer develops carpal tunnel syndrome from relieving their “symptoms.”