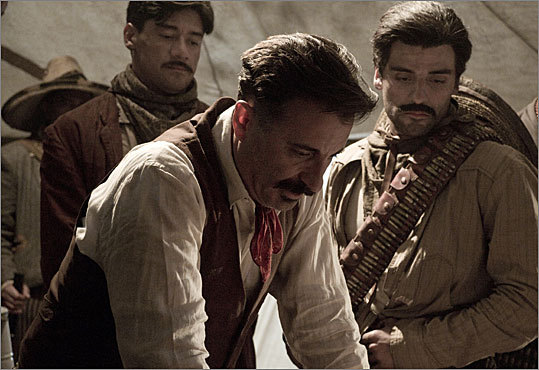 Some bad movies can make you feel awful for the people who made them and worse for the audience that shows up. The actors, the script, the camera: There’s nowhere good they can go. “For Greater Glory” is that kind of bad movie: a total embarrassment. It’s an epic about the Cristero War, which more or less began in 1926 after the Mexican government outlawed all forms of religious expression while continuing an ongoing anti-Catholic campaign of persecution, torture, and murder. The movie’s length has little to do with vision, scope, or scale. The scenes just plod along without much to help distinguish them. It’s not an epic movie so much as an epic run-on sentence.

Surely this story could be told in a way that doesn’t force you to bury your face in your hands. How can a movie with so many images of bodies hanging from telegraph poles be so boring? This is the sort of film that thinks it can ratchet up the drama by pouring the score all over every scene. But even a maple tree can have too much sap. So whenever Andy Garcia, playing the paunchy general leading the resistance, uses his gravelly baritone to tell someone he was a military man — he must say a version of “I’m a veteran of two wars” about 36 times — there’s music to add drama or sweetness or just the illusion of vitality. Is Catalina Sandino Moreno just standing against a wall? Well, pour, maestro, pour!

You don’t get swept up or lost in the stakes of the war because the sequences aren’t ever set up and the actors have nothing to do: Moreno plays a well-heeled revolutionary but the mustaches in her midst are allowed to express far more. Everything happens here because that’s what either the script (by Michael Love) or Wikipedia says. The movie takes a long time to establish its baldest development.

President Plutarco Elias Calles (Rubén Blades) is almost personally overseeing the humiliation of a tiny foot soldier (Mauricio Kuri) in General Garcia’s army, and what happens to him is the closest the film comes to camp.

The kid takes up a quarter of the movie and stands for all the anti-government, pro-Catholic outrage. He winds up starring in a Christ allegory — there he is more or less walking the Stations of the Cross. And, oh my: That appears to be a Pietà scene. Does a religious epic also need a religious allegory? It’s the storytelling equivalent of having two women show up in the same dress.

Anyway, Kuri looks ready to do a tap routine. He’s raw and might suffer early onset razzmatazz. But he’s the only person here willing to give everything he’s got. Garcia, Blades, Moreno, Eva Longoria, Bruce Greenwood, Oscar Isaac, Nestor Carbonell, even Peter O’Toole, who has a few early scenes as an ancient British priest: They’re all holding back. But Kuri is too young to be ashamed.

“For Greater Glory” wears its indifference to quality like a moral imperative. How dare you laugh at the hair and the accents and the plot and the acting and the costumes and the montages and the shootouts. How dare you wonder what happened to the sex bomb we used to call Andy Garcia. How dare you ask, aloud, what on Earth was anyone thinking or why does everything seem so chintzy. For God’s sake (seriously, for His sake), we’re doing history here!

That would be one misguided and grandiose way to look at “For Greater Glory.” Another would be that they’re doing the History Channel.

Rated: R (war violence and some disturbing images, many in the form of facial hair)