Crimes of action and inaction 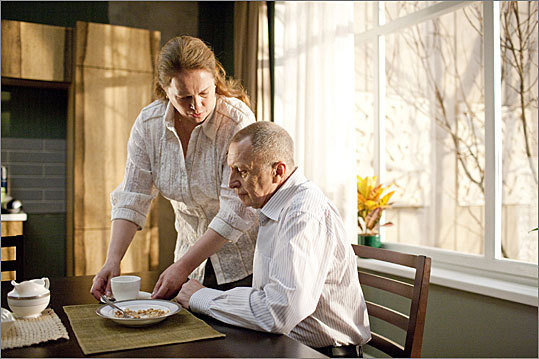 ‘Elena” is a “Crime and Punishment” for Putin’s Russia, meaning that the crime goes almost unnoticed and the punishment is for us to work out. It’s a thing of severe and chilly beauty, directed by the prodigiously talented Andrei Zvyagintsev, whose 2003 debut, “The Return” was a nearly biblical tale of fathers and sons. I haven’t seen his 2007 follow-up, “The Banishment,” but “Elena” reveals a filmmaker in full command of his art and not much interested in catering to an audience. If you want this film, you have to meet it more than halfway.

The rewards are there. With inexorable pacing and luxurious camerawork, Zvyagintsev draws us into the lives of Elena (Nadezhda Markina) and Vladimir (Andrey Smirnov), an older, well-to-do Moscow couple. It’s the second marriage for both; they met when Elena was Vladimir’s nurse and, in a very real way, she’s still working a service job. The silent opening sequence shows dawn creeping over their lavish apartment complex as Elena rises and begins to order her husband’s daily life. She’s a classic Russian figure: a stolid, watchful workhorse who reveals only glimpses of the woman nesting within.

Each has a grown child from a previous marriage. Vladimir’s daughter, Katerina (Yelena Lyadova), is an upper-middle-class wreck with scorn for her father’s bourgeois complacency; there’s love there as well, but she’s too busy playing the aging teenage rebel to indulge it. Elena’s son, Sergey (Aleksey Rozin), is a working-class layabout with a thuggish teenage son and no interest in finding a job. Katerina and Sergey are the twin blank faces of Russia’s future, but “Elena” refuses to moralize. The film operates at a surgeon’s remove, neither inviting sympathy nor discouraging it. One of Philip Glass’s more muted scores burbles alongside the (in)action like a threnody.

Vladimir falls ill, and the question of whom he’ll leave his money to is broached. There’s a crime, almost glancingly depicted and subtly ironic in the ways it uses the means of macho Russian entitlement as a weapon against itself. In its aftermath, Zvyagintsev continues to withhold judgment, only asking us to consider what’s left in a society operating without a moral framework. The answer, more or less, is family and money, and not necessarily in that order.

Who gets to inherit this prostrate culture? Who are the monsters here and who are the victims? Everyone keeps changing sides. Where the patriarchal power struggles of “The Return” felt universal, “Elena” may play less strongly to non-Russian audiences — it assumes a spiritual exhaustion American moviegoers may not share — and its anger, while present, is buried far down in the mix. Zvyagintsev has created a remarkable work nevertheless: a slow, skilled autopsy to an accompaniment of carrion crows.

In Russian, with subtitles