A French version of ebony and ivory 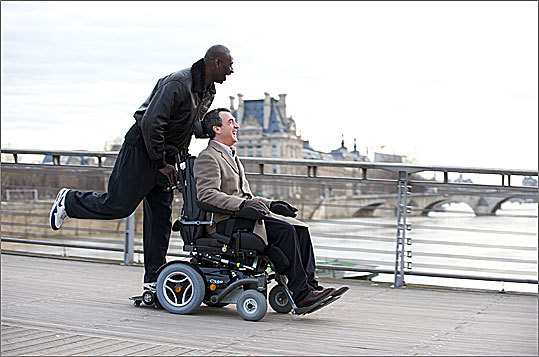 Francois Cluzet as a paralyzed millionaire who forges an unlikely friendship with the Senegalese-born thug (Omar Sy) he's hired to take care of him, in the film "The Intouchables." (Thierry Valletoux )
By Wesley Morris Globe Staff / June 1, 2012
Text size – +

The second biggest hit in all of French filmdom tells the story of a ritzy white quadriplegic (Francois Cluzet) who hires a bald, Senegalese-born thug (Omar Sy) to take care of him. It’s called “The Intouchables,” and in France it’s made almost everybody feel good about ebony-ivory relations. The aristocrat’s name is Philippe. The thug’s name is Driss, and he can be counted on to laugh at the costumes at the opera, turn his nose up at exotic foods, and use his street smarts and big mouth to exasperate the rich and cultured.

I checked the production materials for “The Intouchables” and failed to find confirmation that any of this was inspired by 1987’s “Disorderlies,” in which the Fat Boys push old Ralph Bellamy around to his heart’s content. (That would certainly have been a better English title; “Intouchables” sounds like a fancy brand name for the plastic bags you use to pick up after your dog.)

The movie, which Olivier Nakache and Éric Toledano co-wrote, codirected, and based on a true story, makes more seemingly direct tributes. Driss listens to music in a bathtub just like Julia Roberts does in “Pretty Woman” — he even goes on a little shopping spree. Unlike Roberts, Driss doesn’t wind up on a fire escape with Richard Gere. The moneybags opens up a bit. The crude tramp opens up even more. But the stakes in “The Intouchables” are so low.

Philippe is an enlightened, open-minded guy. He’s looking for friendship with a caretaker and romantic love with a woman. He and Driss go parasailing. He helps Driss get his instant art career off the ground. When Driss complains that Philippe’s teenage daughter is a brat, we hear Philippe tell her so.

Still, the movie wants you to think that everyone in Philippe’s world of money and good taste is going to get hung up on the fact that Philippe is black. But his race isn’t his problem — nor is the fact that he’s poor or originally from Africa. He’s obnoxious. He tries to love up on a woman on Philippe’s staff. He throws around a guy who habitually blocks Philippe’s driveway.

He’s exactly who the movie assumes certain opera lovers think of as a tall, dark-skinned man in a leather jacket. That’s crazy. Paris has more than one such gentleman. He works for corporations. He’s a doctor. He’s a movie star. He has amazing teeth. Because Sy is such a good-looking, immensely charismatic guy (he earned a César for this performance; he’s the first black to win best actor in France), the movie has no choice but to make the character a vulgar loudmouth. Otherwise, there’s absolutely no tension.

But Driss is also “real.” That’s part of the reason the movie is such a massive international hit. Driss represents the truth, and everyone else is fake. He’s been to prison and has been evicted by his mother for indolence; she’s got too many kids at home to put up with his distractions. But the movie is only about Driss’s charm. When he shows up for a recital, the assistant he’d been trying to seduce says he looks like Barack Obama. She’s out of her mind.

All the white people do in this movie is flatter and spoil and humor Driss. America has a racial-guilt problem. France’s might be more insidious. Driss spouts his crass, egotistical crap, and all Philippe’s chief assistant (Anne Le Ny, who’s wonderful) can do is laugh. When Driss plays Earth Wind & Fire after the recital and starts dancing, we’re not supposed to find it rude. We’re supposed to appreciate the mixing of culture. But this tired little movie got on my last nerve. If Driss is so charismatic and so full of ingenuity, why isn’t he using any of that skill to help lift up his family?

Written and directed by: Olivier Nakache

and some drug use)