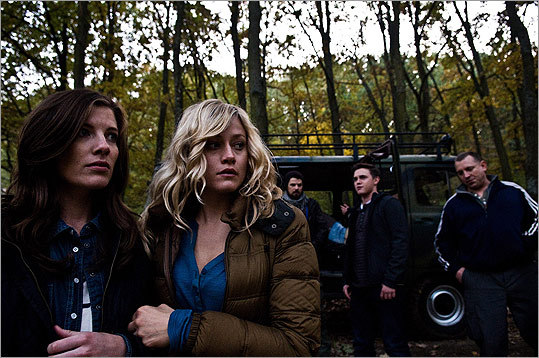 Poor decisions and bad luck are contingencies of most horror films. Marion Crane decides to take a shower at the Bates Motel. People on Amity Island continue to swim in sharky water. The kids on Elm Street can’t stop falling asleep. All that appears to be motivating anybody in “Chernobyl Diaries” to do anything is paltry screenwriting. Chris and Amanda and Natalie visit Chris’s brother, Paul, in Kiev. The plan is to go to Moscow, but Paul thinks it would be fun to pile inside a stranger’s van and head to the site of a town abandoned after the Chernobyl nuclear plant disaster in 1986.

There are scraps of interest. Four or five people in the audience might see these guys wandering around big, vacant, Soviet-era structures and wish to quench an urge to watch something by Andrei Tarkovsky. But they won’t say anything because that observation would be more interesting than what they are actually watching. There’s also the matter of style. The movie has been shot with a hand-held camera that suggests that someone in the group is a cinematographer. It looks like the found footage in stuff like “Chronicle” and “Project X” but with reverse shots, shifting point-of-view shots, and competent editing. When three characters find the cellphone of two missing characters, the explanatory video one of them made is actual found footage. We’re supposed to understand this is just nominally creepy camerawork.

Anyway, it’s all assembled from a kit. Something is still alive — and it’s not the bear that jogs by them in an empty apartment complex or the dogs that might have ripped up Chris’s leg. The movie wants us to find this frightening, but there’s no suspense, no terrifying images. (There’s no diary, either!) No one runs for dear life. They just inch into one small, dark room after the next. There is a pitiful attempt to bring the nuclearness of things in on the action and a worse attempt to end it all. The plot twist has arthritis.

The actors playing the four Americans — Jesse McCartney, Jonathan Sadowski, Olivia Dudley, and Devin Kelley — have natural enough rapport. They could be improvising. So could the two people playing the hippie couple that joins the tour. But the real stars of the movie are the tired devices and plot points. They’re famous, but they’re as old as Betty White: The Guide Is Dead, The Van Won’t Start, Her Shirt Has a Plunging Neckline, Don’t Go in There. That last one doesn’t happen for us this time. It’s more like: Please. Go in there. We want to go home.

Don't watch these with the lights off. See our new list of the creepiest movies of all time.