‘Polisse’ a cop thriller with a special electricity 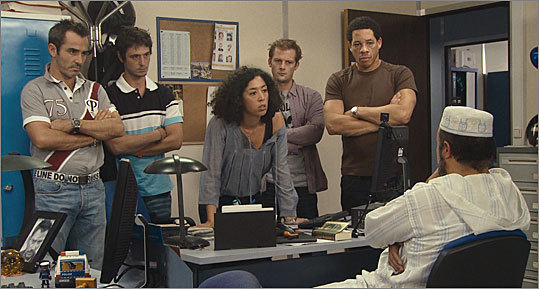 Yes, “Polisse” is the sort of cop thriller where people do things like angrily bang on a desktop or sweep everything off it. If it happens once, it must happen six times. But every time it did, I wanted to stand up and cheer, which I‘ve never wanted to do for any such thriller.

All the cops in this movie are mad. The Paris police department here is tightening the screws on its child-protection division, and the bureaucracy has further shortened fuses that were already nubby to begin with. So if a parent is clearly guilty of neglect or molestation and receives a mere slap on the wrist, the men and women in the unit go bonkers.

The entire movie is pitched at a scream. But the screaming is more Janis Joplin, Axl Rose, or Mary J. Blige than Jamie Lee Curtis. All the tears I shed were hard-earned. So were all the laughing and clapping and eye-covering. In each case, it was involuntary. The movie’s power comes from a combination of tremendous graphic bluntness in the interrogation scenes and the unsparing way the men and women on the force talk to each other.

From the first scenes, which are just a throbbing children’s song coupled with leisurely images of kids smiling into the camera and the po-po nabbing a skateboarder, it’s obvious that the director and co-writer, Maïwenn Le Besco — or as she credits herself, simply “Maïwenn” — understands what she wants to do. I felt her movie’s energy bond itself to mine. I wanted to go wherever she wanted to take me, and that place is nowhere so much as the police procedurals that proliferate on television sets around the world. Here the unit comprises men and women with big tempers and an allergy to minced words. When they interrogate young victims, they do so with direct language that Jerry Orbach or Mariska Hargitay would never have used. In pinpointing the nature of sex crimes and exploitation, what good are euphemisms?

“Polisse” is so like those shows that it’s utterly unlike them. It’s raw where, say, “SVU” is slick. It’s personal where “CSI” is histrionically forensic. It’s funny where “NCIS” can be labored. The cases come and go, but the film focuses on the detectives (their lives in the office and at home) more than on the crimes. People have complained that the children in “Polisse” get shortchanged. But, in most cases, the abuse speaks for itself — and Maïwenn’s little actors are amazingly subtle emotional specimens. Anyway, I don’t know that she has anything original to say about child abuse: It’s bad. The question here is whether the department and perhaps these righteous cops are making matters worse.

This is a movie about social work and society, not a television show devoted to the myth that socio-legal justice provides closure. I overhead a peer complain that “Polisse” is just a TV pilot. What planet is his TV on? Ultimately, we’re not asked to see anyone as a hero — and thank God, because the men and women protecting Paris’s kids are skankier, more ethically challenged, and more humanly dysfunctional than they are in most movies about cops, where you’re often left to wonder how they get any police work done. Here you sense that work is both saving these people and savaging them; it’s an amplification of who they are and something they can bury their problems within.

Most exhilarating is how Maïwenn has gotten the mostly famous actors — including herself; her co-writer, Emmanuelle Bercot; Karin Viard; Frédéric Pierrot; Marina Foïs; Nicolas Duvauchelle; Naidra Ayadi; Karole Rocher; and the rapper Joeystarr — on the same page. We tend to think about chemistry in terms of sex and romance. But it’s just as crucial with cops and crime, and not because, in this case, the job involves sex and romance. (I’m thinking only about the police; Maïwenn casts herself as the utterly shy yet suddenly sexy photographer whom the gang reluctantly allows to tag along and winds up in the arms of one officer.)

During a few of the interrogations, which often occur at desks amid the other chaos of the office, what the camera catches actors doing in the background or on the margins of the frame is often just as crucial as what’s going on at its center. One superb monologue that Ayadi delivers to a bad dad about the role of women in Islam is a tour de force both as performance and choreography. She goes off, and when her surly target stands up in defiance, the cops behind her all use the same fluttering hand gesture to fan him back to his seat — they are comic Pips to her seismic Gladys Knight.

The ending’s a melodramatic disaster. Maïwenn spends a couple of hours making no false moves and two scenes making nothing but. Still, by that point, the only place left to go for “Polisse,” which won the Grand Jury prize last year at Cannes, is out the window. This is a volcano of a movie that despises secret shames and the people, mostly men, who use sex and bad judgment to impose them. You can imagine a churlish drama in which right and wrong are put through some kind of righteous spelling contest. But the audience knows the difference, so for Maïwenn there’s nothing to spell out. She luxuriates in all the emotional and psychological complexities, while acknowledging that, with children, true innocence can also be a tricky business. Her filmmaking paces and perceives the way Frederick Wiseman’s does. Her transparency simulates his. It’s as if she’s taken one of his documentaries about systems and their discontents and added Sidney Lumet’s grit, naturalism, and fireworks. I might see a better movie in the next few months, but I’m not sure how.

Written by: Maïwenn and Emmanuelle Bercot

In French, with English subtitles