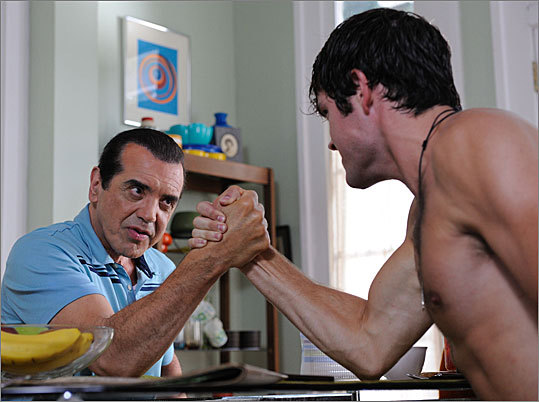 It’s 1974. A well-to-do but down-to-earth Jewish couple, the Fines, are moving from Brooklyn to New Orleans. The husband wants to be closer to the garment factory he owns there. They have two teenage daughters.

The situation offers several directions to go in: period piece, culture clash, generational clash, coming-of-age story, and there’s always character study. The father, Joe, is a hustler and charmer, but with serious anger-management issues. The mother, Stella, was a war refugee who spent two years hiding from the Nazis — “like a real-life Anne Frank,” says the younger daughter, Natalie, in voice-over as a grown-up. (Jodelle Ferland plays the daughter. Janeane Garofalo, sounding Fran Lebowitz-sour, does the voice-over.)

There are two problems here. Too many directions can be as much of a liability for a movie as too few, and “Mighty Fine” heads in all of them. The other is that Andie MacDowell plays Stella. Forget the Anne Frank comparison. Andie MacDowell employing a “Sophie’s Choice” accent — thank goodness Joe doesn’t wear any seersucker — violates some kind of existential law of movie acting. Clint Eastwood doesn’t turn the other cheek. Steve Carell doesn’t play smart. Zach Galifianakis doesn’t take his meds. Andie MacDowell doesn’t do any accent other than the one she was born with.

Writer-director Debbie Goodstein-Rosenfeld, in her feature debut, includes several sly touches. Stella’s name nods to a certain other tough guy’s wife who lived in New Orleans. The van that brings the Fines’ furniture from Brooklyn belongs to Exodus Moving. The cheerfully hideous prints that Stella wears evoke ’70s awfulness without fetishizing it.

Goodstein-Rosenfeld’s direction is slack, though. Scenes proceed agreeably enough, but with little tension or impact. Then again, any movie whose subplots range from a conspiracy to commit arson to a high school poetry contest can’t help but have a hard time not seeming wayward.

Chazz Palminteri’s the best thing in the movie. He now has the look of a slightly beefier Steve Buscemi. But where Buscemi is all nerves on edge and something bad waiting to happen, Palminteri has a winning ease. He ensures that Joe’s strut is a soft-shoe routine — you can see why Stella and the girls put up with him. Unfortunately, Palminteri’s amiability also makes Joe’s bouts of rage seem a mite implausible. He may have a short fuse, but it sure seems damp.

As the older daughter, Maddie, Rainey Qualley has a slightly unsure-of-herself lusciousness that’s distinctive. It’s a performance that reminds you how rarely American movies get right adolescence on the cusp of adulthood. Qualley is MacDowell’s daughter. Her mother’s breakout role came in a movie set in Louisiana, “Sex, Lies, and Videotape.” Will hers, too?

Written and directed by: Debbie Goodstein-Rosenfeld