The Story of Film: An Odyssey

‘Story of Film’ is an ambitious 15 hours 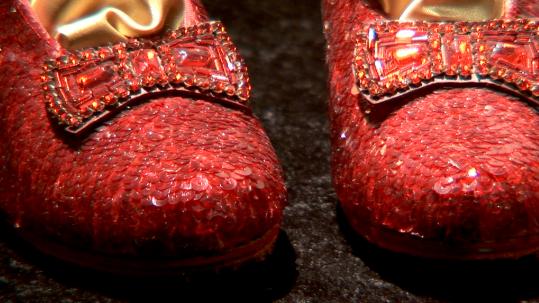 The ruby slippers that Dorothy wore in “The Wizard of Oz.” (Mark Cousins/Hopscotch Films)
By Mark Feeney Globe Staff / May 16, 2012
Text size – +

‘The Story of Film: An Odyssey,” an eight-part documentary that ran on Britain’s Channel 4 last fall, takes in 14 decades, six continents (sorry, Antarctica), and one art form. Like that art form, it’s wildly ambitious, often extremely good, occasionally maddening, and always stimulating. Writer-director Mark Cousins’s unifying conception is cinematic innovation — or as he pronounces it in his rather enchanting Ulster accent (he narrates, too) “en-iv-ay-shun.”

The Museum of Fine Arts will be showing paired episodes of the documentary starting Wednesday and running through May 27. Cousins follows film history in largely chronological order — “largely” because he delights in jumping ahead to show thematic, stylistic, or even visual continuities. A shot of foaming bubbles in “Odd Man Out” leads to one in “2 or 3 Things I Know About Her” and another, in “Taxi Driver.”

Each episode employs three basic elements: film clips, talking-head interviews, and contemporary footage of a location relating to whatever subject is under discussion. Cousins, who’s also principal cameraman (when did he sleep?), is particularly fond of juxtaposing a film excerpt with a shot of that site as it appears today. This sounds gimmicky, but it works surprisingly well.

What doesn’t work so well is the array of talking heads. Interviewees include Stanley Donen, Bernardo Bertolucci, Baz Luhrmann, Paul Schrader, Claire Denis, Woo-ping Yuen, Youssef Chahine, and Lars von Trier (and that’s just some of the directors). It’s an imposing list, but few of them add much, if anything, to Cousins’s commentary. Nor is the preen factor inconsiderable. If Gus Van Sant were any more languorous he’d be a prop. And going from a clip of Maria Falconetti, in black and white, weeping, in the silent classic “The Passion of Joan of Arc” to von Trier, in color, yapping, isn’t just inartistic. It borders on obscene.

Conversely, someone like Amitabh Bachchan is a welcome presence. It’s easy to see why he’s so beloved by Bollywood audiences. Bachchan may be almost entirely unknown to Western audiences, but that’s the point. Hollywood has never had a monopoly on film history. Cousins explicitly cites innovation as the documentary’s defining principle, but another principle defines it implicitly: international. The odyssey the subtitle refers to is very much global in nature — as it has to be.

If anything, Cousins has a bit of an anti-Hollywood bias. That’s not necessarily a bad thing, of course, though the use of a red Christmas ornament as a recurring motif to symbolize the “bauble” of Hollywood moviemaking gets to be a bit much.

Is “The Story of Film” worth 15 hours of your viewing life? Well, that’s between you and your kino conscience. The first part certainly is. Cousins is extremely good at laying out the emergence of a film grammar. More important, he communicates the sense of wonder and excitement that characterized the emergence of so astonishing a medium.

That sense never entirely leaves the documentary, even if things do drag a bit in the postwar years and some of Cousins’s observations get a mite debatable as we approach the present. Did the decade after 9/11 really mark a return to reality in cinema? Hmm. Part of the wonder of the medium is how variously it allows us to define reality. Another recurring motif in “The Story of Film” is a shot of the ruby slippers Judy Garland wore as Dorothy. What’s more real than footwear — or, in this case, more magical? One man’s reality is another’s fantasy — and their sum is the story of film. Every time the lights go down, the opening credit of every movie ever made could be “Welcome to Oz.”

For “The Story of Film” screening schedule, go to www.mfa.org/programs/series/story-film-odyssey.

THE STORY OF FILM:

Written and directed by: Mark Cousins

At: Museum of Fine Arts, Wednesday through

May 27, in eight episodes