French teens on the brink of the rest of their lives 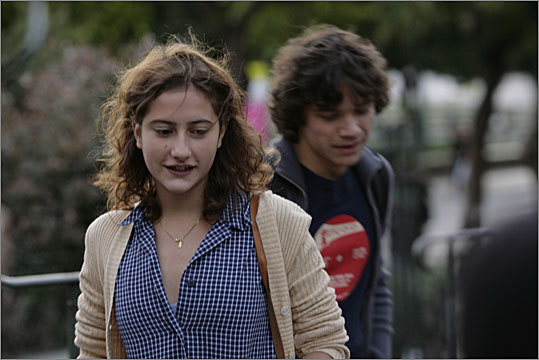 In movies, there are some things the French do that Americans are increasingly incapable of doing. One is honoring the complexities of youth. It’s a quiet, difficult undertaking, requiring subtlety in a filmmaker and perception and patience from us. But a good director can make it look terribly easy.

All Mia Hansen-Love has done with “Goodbye First Love” is present the story of Camille and Sullivan, two teenagers in Paris on the brink of the rest of their lives. But the movie uses its maker’s keenness and unique sense of rhythm to chart the emotional shifts between her paramours without calling attention to the change. Eight or nine years pass and what we have for cues is the length of Camille’s seemingly retractable hair and a shot of some scribbling in the corner of a notebook that reads “2007.” That moment is like standing on the beach as the tide creates the illusion that you’ve moved. You haven’t, and yet you have.

There’s tension in the relationship. When we meet them they’re in high-school. Sullivan (Sebastian Urzendowsky) is older than Camille (Lola Créton). He wants to drop out and bum around South America. He loves her but craves freedom, discovery, growth. His disdain for dependence exasperates and her: She thinks she’ll be nothing with him. We have to become real people, Sullivan tells her. He feels he needs something to bring to the relationship – a point of comparison, perhaps. He craves life. She appears to course with only the literary equivalent, and that addiction to melodrama exasperates him.

When he leaves for South America, the country-house getaways and exploratory kisses come to an end. And for anyone who’s been someone’s discard, the sight of her sitting around her parents’ home is a universal one. Except Sullivan hasn’t ended the relationship – or he doesn’t think he has. The trip is an investment of sorts. He plies Camille with handwritten updates, enumerating both the stops on the trek and his feelings for her. But he can’t meet her demands. The misery of her occasionally empty mailbox becomes a signal of their Sisyphean romance. He’ll never love her enough. The boulder becomes too much to bear, and he stops pushing it.

The film then becomes about Camille and the expansion of her horizons. This includes a phase of semi-chic androgyny (baggy pants, chopped-off hair, severe disaffection), work at a nightclub, and taking boys home only to make them sleep, unsexed, on the sofa. It also involves architecture and eventually the architecture professor (Magne-Håvard Brekke) who teaches her the value of incorporating lightness into her designs.

The delicacy of “Goodbye First Love” stems from Hansen-Love’s touching refusal to have Camille learn about life through lessons. She learns it, instead, by living. There isn’t much going on in Créton’s face. Urzendowsky is far more charismatic and seductive – you more than understand Camille’s addiction to Sullivan. Créton is cut from classical French cloth that way. But she’s not a blank, either, just minimal. Plus, that kind of acting suits the character’s romantic monomania. When Sullivan appears at the window of Camille’s parents’ place before he leaves and she races to let him in, exclaiming, “My Romeo!,” Créton reminds us that her acting has another gear. Mostly though, she emits heartsickness – but with radio-signal clarity.

This is an easy movie to spoil. It’s rather plotless. But things happen in precisely the way that life happens. Hansen-Love’s screenplay is spare but attuned to the pros and cons of human nature. She’s only 31, and this is her third film (“All Is Forgiven” and the superb “The Father of My Children” preceded this new one), but that loaded spareness appears to be her biggest asset. A little counts for a lot. What’s on display here is that people are fundamentally incapable of being anyone other than who they are no matter how many years pass or how much experience has been tucked under one’s belt. Love is blind, they say. The movie understands the hazard of that cliché: Some lovers are also blind spots.

Written and directed by: Mia Hansen-Love

Unrated (some language, nudity, and sequences of intense heartsickness)