Inside job for art thieves 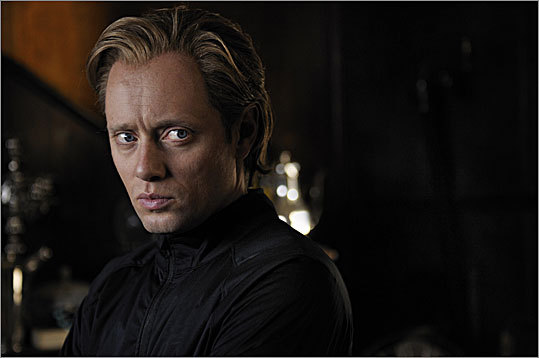 How do you know when a crime thriller is set in Northern Europe? The interiors are clean and off-white, the coffee looks fantastic, and there’s a naked Valkyrie in the shower. “Headhunters,” based on a novel by the best-selling Norwegian author Jo Nesbo, neatly arranges its hero’s amoral lifestyle like a high-end furniture showroom, only to smash the chairs to pieces. It’s crisp entertainment even as plot absurdities gum up the works — you can almost hear the pages turn as you watch.

Roger Brown (Aksel Hennie) is a pint-size Master of the Universe, Oslo division — a corporate headhunter with a multimillion-dollar house, a gorgeous Nordic wife named Diane (Synnove Macody Lund), and a chip on his shoulder the size of a fjord. He’s also an art thief in his off-hours, sizing up prospects during placement interviews and burgling Munchs and whatnot with the help of an accomplice (Eivind Sander) in the alarm company’s headquarters. Apparently all of Norway uses the same home security outfit.

The appearance of a Danish businessman named Clas (Nikolaj Coster-Waldau) represents a double bogey: Freshly retired as CEO of a nano-tech company with military ties, he could be just the executive Roger’s big client is seeking — and he has a long-lost Rubens in his late grandmother’s apartment. That the outrageously handsome Clas has eyes for Diane and a past in black ops doesn’t faze our man, even though it should.

At about the midway point, Roger’s plans go seriously awry and corpses start piling up in a manner that suggests Elmore Leonard without the tan. If only director Morten Tyldum were able to summon some of Leonard’s wit; instead, “Headhunters” purrs along with smooth facelessness even as the details get grislier and more preposterous. By the time Roger has survived being shot at with an Uzi, plunged over a cliff in a car, and been attacked by a knife-wielding ex-girlfriend (Julie Olgaard), our disbelief is hanging on by a shred.

The movie’s lead actor is its strong suit: Hennie has a fox’s ready smile and the insecurity of a short man in a nation of beanpoles. We root for his chicanery to win out, even if his magnificent Norwegian head of hair might not make it to the end credits. There’s a bit of Patricia Highsmith’s talented Tom Ripley to Roger — the art thefts, the love of excellent living, a tendency for dead bodies to appear when least welcome — but the character takes more of a beating than Ripley ever did, and he’s prone to a sentimental streak the film’s not sure how to handle.

The film’s interest in technology is easier to swallow, with its tiny tracking devices that reduce Roger to clothes-peeling fits of paranoia, and a stalker app that I bet Nokia wishes it had. Sleek, engaging, and disposable, “Headhunters” will look fine on your home screen and even better on a shelf at Brookstone.

Ulf Ryberg, based on

the novel by Jo Nesbo

In Norwegian, with English subtitles