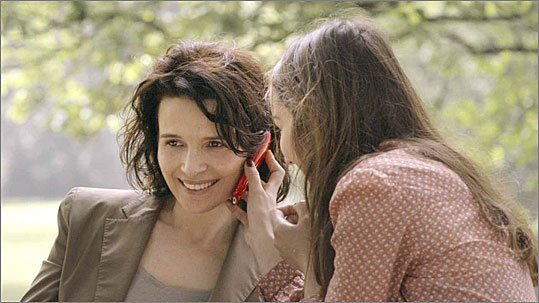 Art-house patrons strolling into the new Juliette Binoche movie expecting sensitivity, subtitles, and tact are in for a jolt: “Elles” rubs our faces in the sins of the flesh. Both provocative and muddled, the film’s a moody, passive-aggressive tract that’s buoyed by superior performances and sunk by its own uncertainties. An alternate title might be “The Joylessness of Sex.”

Binoche plays Anne, a bourgeois Paris housewife and freelance journalist researching an article on university students who moonlight as prostitutes. Her inquiries lead her to Charlotte, a.k.a. “Lola” (Anaïs Demoustier), a deceptively innocent gamine, and Alicja (Joanna Kulig), a Polish exchange student with anger raging under the surface. The former got into the business almost as a lark, the latter out of financial need, and both admit it’s hard to quit. “It doesn’t take much time and you get used to the money,” Charlotte observes.

What’s Anne in it for? A reporter’s curiosity at first, and then a possibly misguided sense of sisterhood. Binoche doesn’t bother to make her character sympathetic, even though the pieces are there: a businessman husband (Louis-Do de Lencquesaing) who takes her for granted, a teenage son (François Civil) who considers her a joke, a younger son (Pablo Beugnet) for whom she’s a provider and an annoyance. The screenplay by director Malgoska Szumowska and Tine Byrckel makes sure we see Anne’s belief in the horrors of hooking as naive — a privileged but blinkered feminist gloss on what the women consider a business transaction.

Yet “Elles” presents them as equally foolish. If Anne doesn’t acknowledge the physical pleasure and sense of control that Charlotte and Alicja can get from their labors — we see the former having a jolly good time with a man we assume is her boyfriend and who turns out to be a john — they’re equally deluded about the power imbalance at the heart of the transaction. Charlotte assures the journalist that her clients are dull married men who natter on about their work, but an ugly scene involving a sadistic customer (Andrzej Chyra) comes along to remind her and us who’s really in control.

As subtle as the acting is, the underlying moral of “Elles” seems to be the reductive old argument that all women are whores and all men johns and that only the bourgeoisie are too blinded by their comforts to see it. It’s hardly a novel formulation — Luis Bunuel was here with lacerating wit back in 1967’s “Belle de Jour,” and dozens of movies and television shows have wrestled with some version of the notion. “Elles” is on its strongest ground when it obliquely depicts the ways society imprisons women in an emotional and financial reliance on men (whereas men just want sex and dinner and don’t care much where it comes from). But the didacticism of the message wars with the poetry of the performances, and the movie drifts into confusion. Szumowska wants to see the battle of the sexes in both black-and-white and color. She ends up with a muddy brown.