Turn Me On, Dammit!

Direct from Norway, a comedy about young hormones 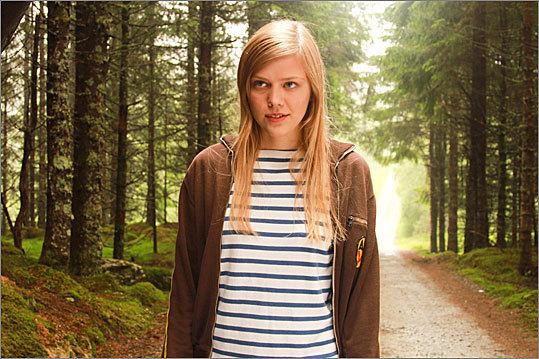 Only in a world dominated by the sexual fantasies of men could the sexual realities of women seem novel. But, at least in this country’s popular culture, men do dominate the world, and so what women want does offer the appeal of novelty. It’s the only way to explain that second “Sex and the City” movie: Ladies needed a “Hangover” to call their own.

What’s refreshing about the Norwegian movie is how direct the girls are. They use the coarse names for penis that everybody else does. When they do it, it’s not for comedic shock the way it would be in another film. This is how we talk. Wouldn’t it be nice to hear Bella Swan actually tell a friend, “Edward just poked me with his [insert street name for penis]!”

Of course, in “Turn Me On,” when Alma (Helene Bergsholm) tells her two friends that Artur (Matias Myren) has done just that, she winds up an outcast for most of the rest of this short, tidy movie that the director Jannicke Systad Jacobsen adapted from a novel by Olaug Nilssen. Alma’s humiliation isn’t a revelation. But it’s not dull, either. The movie works best when it inhabits Alma’s hormonal boundlessness. All day she dreams about sex and seduction — with fit, fatless Artur; with her mean, blonde frenemy, Ingrid (Beate Stofring); with her charming supermarket boss (Jon Bleiklie Devik), who happens to be Ingrid’s father. The first time we meet Alma, she’s on the floor of her kitchen masturbating with the help of a phone-sex line. Oh, the things she could teach Bella about delayed gratification.

As nicely handled as the sex stuff is, the film’s best character is Alma’s best friend and Ingrid’s less boringly pretty sister, Saralou (Malin Bjorhovde). She’s sour and smart and wants desperately to escape the film’s tiny rural town. All the good lines belong to Saralou, and her reluctant romance with the school hash dealer deserves its own movie if only to make more of the dear-diary letters she writes to death-row inmates in Texas. Her clueless compassion feels like a ripe lampoon of how the perception of American injustice brings out the patronizing liberalism of certain Europeans.

Fifteen years ago, Bjorhovde would be Janeane Garofalo to Bergsholm’s Uma Thurman. All acting here is as flat as Garofalo’s. But this story has some shape, and, ultimately, the vulgarity is put to happy use. I can’t think of another movie whose finale uses a reference to genitalia to warm your heart.

Turn Me On, Dammit!

Written by: Jacobsen, based on a novel by Olaug Nilssen

In Norwegian, with subtitles