‘Damsels in Distress’ gives it the old college try 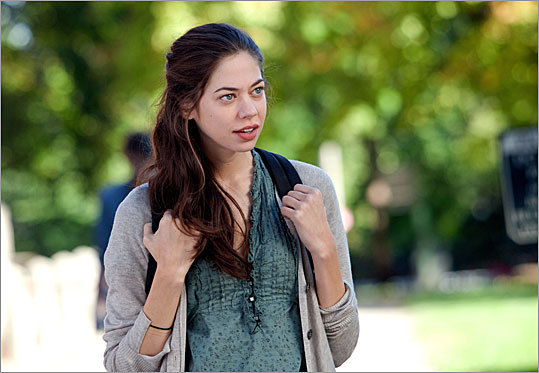 In the 13 years since Whit Stillman’s last acerbic joke on the bourgeoisie, the culture’s mutated two or three times. The joke, I suppose, is that rich people never change — not in any of his four films. Location is all that distinguishes the young adults in “Metropolitan,” “Barcelona,” “The Last Days of Disco,” and the new movie, “Damsels in Distress” — respectively, an Upper East Side apartment, Spain, Manhattan in the late 1970s, and a leafy college campus right about now. Otherwise, the characters’ sense of propriety and manners — almost vestigial ways of life — provide continuity.

“Damsels in Distress” is the least of the quartet. The lovely, almost touching feat of those first three movies was the way they managed to satirize cultural decadence and social decline without lingering over decay. The joke was as much on modernity as it was on the films’ persnickety, etiquette-bound anachronisms. No matter the era, these were effetes who sensed barbarians rattling their gates. You didn’t always need to see the cretins in these movies to know they were on their way.

The cretins are all over “Damsels in Distress.” Whenever a pack of hipsters or stoners or punks pass Violet, Rose, and Heather (Greta Gerwig, Megalyn Echikunwoke, and Carrie MacLemore), the movie’s three socially conjoined coeds — his usual debutantes — catch the vapors. That’s how bad these bad boys smell. All the women’s exclamatory nose-holding and squealing and hypersensitivity to hygiene — this is how some people act when they’re recovering from food poisoning.

In the opening minutes, the debs take charge of Lily (Analeigh Tipton), a less well-heeled transfer student new to Seven Oaks, the sort of small liberal arts college where “non-procreative lovemaking” is how skittish undergraduates say “anal sex” and where a woman’s consent to make that kind of love constitutes a crime against decency. Violet, Heather, and Rose (but mostly Violet), strive to maintain a vestal air. They love perfume and headbands and fragrant soap. As good citizens, they do campus suicide prevention. As romantic creatures, they prefer stupid boys at fraternity parties the way stupid boys at fraternity parties prefer drunk girls. They seek out an inferior fellow and help him “realize his potential.” This, to them, is charity work, gathering up tattered social fabric to sew together someone new but old — yesterday’s man.

Lily is meant to present a physical and philosophical contrast to her new mentors, and Tipton is a ropy specimen of diffidence, Olive Oyl among the Betty-and-Veronicas. After a few scenes, Lily becomes aware that her guides are almost as shallow as the men they seek to help. Heather’s a dingbat, Rose a prude (from England!), and Violet the sort of hypocrite who rants about the need for new popular dances. They’re cretins in A-line skirts and cashmere.

Violet welcomes Lily’s skepticism about her intelligence and the purity of her motives and seems to tolerate her interest in a boy (Adam Brody) she also likes. But Lily is a shaky foil. After a few scenes she’s holding her nose, too. Once she fails to identify an artichoke, you have to ask what Stillman is going for. After a few days with those three, has Lily become a moron, too? The movie is about a kind of communal, contagious dumbness. Stupidity is a socially transmitted disease. But that doesn’t always come off, since these are characters whose poise and eloquence create an uneasy incongruity with their ignorance. Stillman’s best creation might be Heather, whose misplaced confidence never fails to result in comedy. He’s committed to her unworldly certitude. So is MacLemore. Her dimness is bright.

Otherwise, Stillman offers at least three characters who aren’t as they seem, the idea perhaps being that college is nothing but four years of shifting personas. But the movie never stops shifting, either. So much of it is acutely funny. At some point, the 1990s Eurodance hit “Another Night” comes on at a party and Violet happily declares it a golden oldie. So much of the movie is indeterminate and confused. Stillman could have devised an entire film around the battle between Violet and a haughty newspaper editor name Rick DeWolfe (Zach Woods). They’re at odds over whether Seven Oaks should abolish its Roman fraternity system. He’s against it. But their skirmish never turns into war. The movie just whimpers to a dénoument, which includes the creation of a new dance craze and then a haphazard musical number that’s like watching Muppets rehearse a show.

There is a very good, very tiny part for a pseudo-suicidal Aubrey Plaza, who’s as much a comedian as Greta Gerwig, but there’s a fire in Plaza that Gerwig doesn’t have. Plaza can act. Even so, this a fun group of actors to watch, although it often seems that Stillman is unsure of what to do with them. “Damsels in Distress” is Stillman in a literal mode that doesn’t suit his elegance. The four leads, for instance, are named after flowers. The characters watch Francois Truffaut and study Evelyn Waugh, but the movie’s true sisters are “Heathers” and “Clueless” and “Mean Girls,” satires with sharper claws.

Yet there’s a poignancy in Violet and her friends’ commitment to the preservation of nearly extinct ways of being young. These are women who seemed raised on Louisa May Alcott and might have been aspirationally besotted with Jane Austen. But you sense tragedy looming. They’re hurtling, inexorably, toward Tennessee Williams.

Written and directed by: Whit Stillman