Many missteps on the stairway to heaven

Overplotted, underwritten ‘Woman Thou Art Loosed’ has more professionalism than it deserves 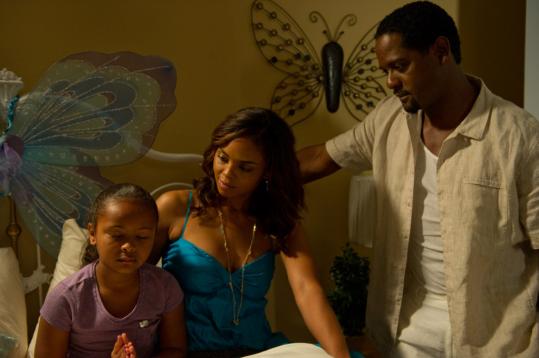 Poor Carrie. She can't catch a break. A life of grit and prostitution in Louisiana starts looking up after she marries a New Orleans professor. It then takes a nosedive when her daughter is abducted. In pain, in stress, in trouble, where will she turn? To her abused women group? To the lord? To that bottle of Jim Beam? To the sexy male detective working the case? Because Carrie is as much a merry-go-round as she is a woman, there's nowhere in “Woman Thou Art Loosed: On the 7th Day’’ that she doesn't turn. And because Sharon Leal is playing Carrie and Blair Underwood the professor, this overplotted, underwritten, powerfully dumb soap-thriller has more professionalism than it deserves.

But not even Leal, familiar to fans of “Dreamgirls’’ and Tyler Perry's movies, is convincing as she drunkenly falls down while holding a birthday cake. When she tries to giggle it off, the only assumption is that the film's director, Neema Barnette, used the wrong take. The entire production is that way: a collection of scenes forced to make sense as a movie, the way when you're desperate to finish a jigsaw puzzle you'll just start jamming any old pieces together. So it's all close but wrong. Some scenes are like watching the start of some porn. The sexy detective (Nicoye Banks) conducts an interview from a sofa while his sexy interviewee (Nicole Beharie) sits on the couch arm and peels off her blazer. Other scenes are hitched to church-therapy outreach. And serving as absurdist mortar to all the movie's bricklaying is Pam Grier, who's butch in pigtails and sleeveless tops.

The movie, which is playing at the Boston Common, projected from what, to my eyes, seemed to be a DVD, is another inspired by the super-preacher and holy redeemer Rev. T.D. Jakes. The first — “Woman Thou Art Loosed’’ — starred Kimberly Elise and was a sleeper hit in 2004. This installment, which Cory Tynan wrote, is just as busy emotionally, but it also wants to be uplifting and lurid. The canted angles, inappropriate flirtation, and movie-thriller strings in the musical score pile up, and you have to ask whether “On the 7th Day’’ is for real. The stairway to heaven might start in the gutter, but this one is missing a lot of steps.

Wesley Morris can be reached at wmorris@globe.com. Follow him on Twitter@wesley_morris.

On the 7th Day

PG-13 (some language, violence, child abduction, and sexiness that's not quite next to godliness)