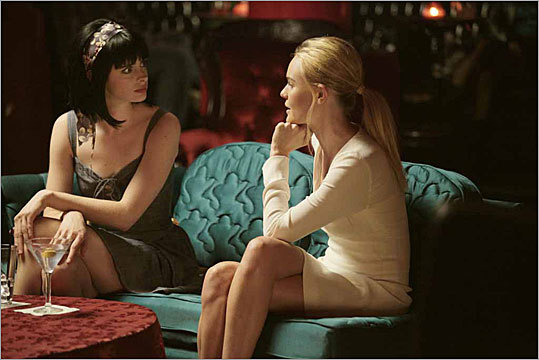 Single motherhood gets the lame sitcom treatment in “L!fe Happens,” a cliche-laden chick flick that seems conceived solely to capitalize on the success of the far more original (and generous to female friendship) “Bridesmaids.”

Krysten Ritter, who wrote the script with pal Kat Coiro, plays Kim, a 20-something dog walker able to afford, even with two roommates, a sumptuous house in Los Angeles’ trendy Silver Lake neighborhood. Ritter, now the star of the TV sitcom “Don’t Trust the B---- in Apartment 23,” has a Zooey Deschanel-like gamine quality that’s appealing, even when saddled with the contrivances of a self-indulgent script. The film opens with Kim and roommate/best friend Deena (Kate Bosworth) bolting from trysts in their respective bedrooms and arguing over who gets the last condom in the house. Deena wins, and nine months later Kim has a baby, Max, who looks at least 6 months old.

Deena, a sharp-edged sex advice columnist, and their third roommate, Laura (Rachel Bilson), whose one-joke character is that she’s a virgin with a succession of sex-centered jobs she finds on Craigslist, help Kim with babysitting chores. But that’s not enough to keep Kim from being terrorized by her obnoxious, perpetually drunk boss (Kristen Johnson) or from the pitfalls of the dating scene. She meets heartthrob Nicholas (Geoff Stults), whose one-dimensional character telegraphs his arc immediately. Because he makes an offhand comment about what a drag kids are, Kim decides she must pass Max off as Deena’s child. Unfortunately, the potential for screwball comedy is wasted because “L!fe Happens” never finds its thematic tone or comedic rhythm.

Despite the broad caricatures and BFF cliches, Ritter and Bosworth occasionally have some fresh moments, such as when Kim meets a supermom who makes Deena bristle. But there are none of the surprises seen in the conflicts of female friendship in “Bridesmaids” or even “Baby Mama.” Single motherhood is treated as a cute quirk at best and a minor inconvenience at worst. When Deena, in a show of support for Kim, rattles off names of boys raised by mothers alone — Winston Churchill and President Obama among them — the trivialization is squirm-inducing. Deena’s flippant sexual independence would be refreshing if the script didn’t try to have it both ways: There’s the pseudo-hip patter of the girls’ endlessly calling each other “dude,” but in the end they both still need a dude to validate their self-worth.

Written by: Coiro and Krysten Ritter

Not rated (sex, language, not appropriate for