In ‘Hipsters,’ no being square in Red Square 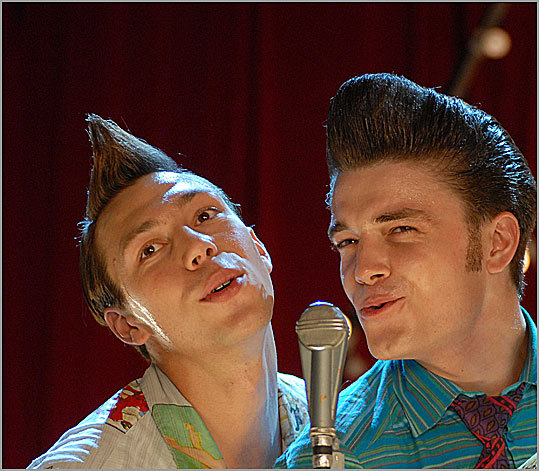 It’s taken the Russian musical “Hipsters” four years to reach America. That’s all right. It may take audiences four years to recover. That’s how ridiculous and goofy and often maladroit Valery Todorovsky’s movie can be. It’s hard to say which is worse about the musical numbers: the music or the lyrics. That said, “Hipsters” is also kind of amazing, thanks to headlong enthusiasm and an endearing obliviousness to just how ghastly the whole thing keeps threatening to become.

Set in Moscow in 1955, “Hipsters” begins with a nod to the “Moonglow” scene in “Picnic,” which is set in Kansas in 1955. There’s no Kim Novak or William Holden here, only a bunch of young Muscovites whose teased hair, wild clothes, and jazz mania make them seem like a capitalist counter-revolution waiting to happen. What obsesses these post-Bolshevik cats and kittens isn’t America as Kansas. It’s America as Oz.

In other words, “Hipsters” is “Swing Kids” set on the other side of the Nazi-Soviet pact. It’s also “American Graffiti,” with the Voice of America substituted for Wolfman Jack – and “West Side Story,” with the hipsters and Young Communist League filling in for the Sharks and Jets — and (why not?) “Moulin Rouge,” thanks to a general Baz Luhrmann shamelessness. For all that these “Hipsters” strive to be hip, they most definitely are not cool.

Mels (Anton Shagin) is a dutiful member of the Young Communists. After he falls for hipster Polly (Oksana Akinshina), he turns into a male Ninotchka. He buys a tenor sax on the black market. He starts wearing his hair in a pompadour that looks like the love child of James Dean and Conan O’Brien. He meets Charlie Parker in a dream. That’s the movie’s only official dream sequence. In fact, the whole two hours feels like a fever dream.

Katya (Evgeniya Brik), the head of the Young Communists, tries to win Mels back. “Every hipster is a potential criminal,” she grumbles. “A saxophone is only one small step away from a switchblade.” It doesn’t take a Kremlinologist to figure out what happens after that.

You can see all the places “Hipsters” comes from. It’s like a movie flea market — a musical one, too. The jazz is bad Count Basie; and eventually there creep in intimations of rockabilly and, yes, a sort of Slavic rap. Yet somehow all these derivate parts make for a very original whole. Felt passionately enough, something ersatz can become its own kind of truth. And in its clunky, junky way, “Hipsters” is nothing if not passionately felt. Todorovsky’s considerable problems with tone and weakness for distracting camera angles hardly matter. This isn’t a movie to go out of your way to see. But anyone seeing it is guaranteed not to be bored. As Mels might say, be there or be Red Square.

Written by: Yuri Korotkov and Todorovsky