Guy Pearce gets in on action in ‘Lockout’ 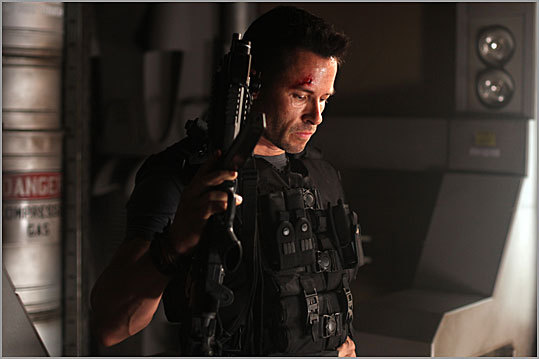 If you're an “Escape From New York” fan, you might have wondered about those rumors about a possible remake. Gerard Butler as Snake Plissken? Hmm. And how would they frame it, exactly, now that the Times Square of the 1981 “Escape” has morphed from hell into Disneyland? Well, wonder no more. Producer Luc Besson's action factory has beaten everyone to it, stylishly. They're just calling the thing “Lockout,” and setting it in outer space.

It's 2079, and Guy Pearce stars as Snake . . . er, Snow, a sardonic ex-government operative wrongly convicted of treason. But G-men Peter Stormare and Lennie James offer him a way out: taking on a mission to rescue the president's daughter (Maggie Grace of “Lost”) from a prison satellite where the inmates are holding her hostage. And since the cons have just woken from a stasis mode that’s messed with their brains, they’re extra rambunctious (notably Joseph Gilgun’s mohawked Scottish nutjob). Snow’s perfectly timed response: “I’m thrilled that you would think of me.”

Given Pearce’s chameleonic gifts — witness “The Adventures of Priscilla, Queen of the Desert” and “Memento” — it's not surprising that he’s great as the buff antihero, starting with an intro that has him spouting a lengthy string of amusing wisecracks between skull-rattling interrogation blows.

The audience obviously has to roll with the high-concept setup. (The hottie first daughter, allowed to board a convict barge on a humanitarian visit? Really?) But first-time writer-directors James Mather and Stephen St. Leger have put some thought into all of this — always a bonus in a no-brakes thriller, especially one of Besson's. The satellite's classified, corporate-bankrolled purpose is to use the prisoners as guinea pigs to test the effects of deep-space exploration. Decent logic. And even when the action turns preposterous, as with a stratospheric skydive unspooled at ADD speed to look, you know, just that easy, Mather and St. Leger are clearly in on the joke. You can picture them grinning at the brazenness of it, and at the thought of the special-effects bucks they saved by not stretching the scene.

Rated: R (intense sequences of violence and action, and language including some sexual references)