Getting inside Gerhard Richter’s studio ‘Painting’ as only Richter can 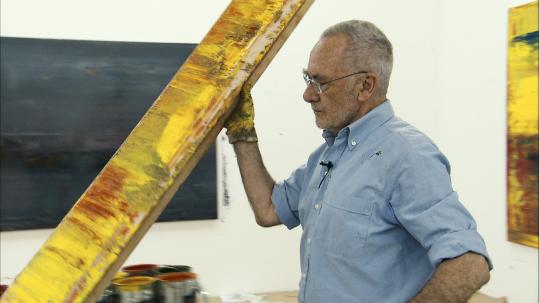 Artist Gerhard Richter in one of his studios that are all white walls and floors. (Kino Lorber films)
By Mark Feeney Globe Staff / April 11, 2012
Text size – +

Gerhard Richter turned 80 in February. Is there a more admired painter working today? The man who emerges in Corinna Belz’s coolly assured documentary is attractive if slightly inscrutable. When he says that a painter can “hide” behind his paintings, an off-camera Belz replies that she doesn’t understand what he means. “Neither do I,” says Richter. (The film is mostly in German, with English subtitles.)

The man we meet is intelligent and good-humored. “They do what they want,” he says with a shrug, indicating a set of just-completed canvases. “I planned something different.” Richter can be dryly funny, too. Admitting that he doesn’t think the canvas he’s been painting is coming together, he says to Belz, “Let’s talk about the film now.”

Richter’s reserved, even a little wary. (Or maybe it’s just that he and Warren Buffett have the same eyes.) When one of the men hanging his paintings for a museum show asks for an autograph, Richter goes off-camera to sign it. Painting “under observation,” he laments to Belz, “is worse than being in the hospital.” As soon as he says it, he laughs, but it’s not clear he meant it as a joke. Either way, he’s not so wary as to have declined participation in the film.

The documentary, which doesn’t have a voiceover, occasionally uses archival footage of Richter from the ’60s and ’70s. Belz also includes several close-ups of individual paintings and now and includes long panning shots of walls lined with Richter’s paintings. Elegant and frieze-like, they offer a visual counterpoint to the lion’s share of the documentary, which focuses directly on Richter.

We see him in various settings: driving through Cologne (where he lives), going over old family photographs, enduring a press conference, attending a London museum opening and a New York gallery opening. Nowhere does he seem as comfortable as in his several studios. As its title might suggest, that’s where “Gerhard Richter Painting” most frequently shows him.

Sometimes he’s with one or both of his two assistants, more often he’s by himself. The studios, with their white walls and floors, look shockingly (Germanically?) antiseptic. They’re like laboratories for art-making. Richter, wearing button-down shirts and thick gloves, doesn’t look like any sort of scientist, though.

One of the things that makes Richter’s body of work so distinctive is how it encompasses so much: abstract and figurative painting, photography and photorealism, and an ability to seem equally at home with very large and very small dimensions. All the paintings he works on in the film are very large abstractions.

The sight of Richter going back and forth between two related canvases recalls Roger Federer playing tennis with himself in slow, deliberative motion. Where Federer uses a racket, Richter employs a house-painter’s brush or oversized squeegee. Applying the squeegee, it’s as if Richter’s vanquishing the canvas (applying paint, he’s negotiating with it). Made of metal and plexiglass, the squeegee looks like a chunk of girder. It’s the squeegee – death to impasto! — which imparts the famous Richter “blur.”

Belz’s film wonderfully conveys the unassailable thingness of painting: paints as gooey-thick as pudding, the mess they make, the various tools Richter chooses to ply his trade (sticks and palette knives as well as brushes and that squeegee).

The documentary ends with a sequence of Richter applying his squeegee to a series of primarily white canvases. The paint has largely hardened, in some cases with the squeegee attaching itself to the canvas. So it takes an extra effort for Richter to do his scraping. We can feel, as well as see, his exertion. Creativity and labor become inextinguishable. Then there’s a panning shot of the studio. The various canvases Richter’s been working on hang on the walls. “Man, this is fun,” he says.

“Fun” is not necessarily a word one would associate with the man we’ve spent the last hour and a half with, or with his art. It’s a measure of how well Belz’s film has succeeded that we can sense what Richter means.

Written and directed by: Corinna Belz

At: Museum of Fine Arts, today and various dates through Sunday

In German and English,