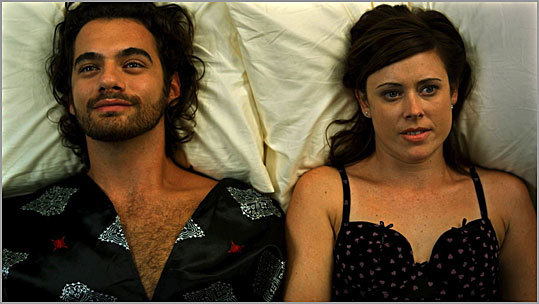 How cute is the science in “Losing Control”? Well, the heroine, a fidgety neurotic named Sam (Miranda Kent), manages to fall into a giant vat of liquid before she goes to a party. After rinsing off, she arrives in a lab coat cinched by a big leather belt. On Diane Keaton? Yes. On Kent? Not so much. This is the sort of movie in which a salad spinner is used as a centrifuge. So, it’s huggable beyond belief – yet authentically so.

Sam is a Harvard PhD candidate whose innovation is a spermicide that stops diseased male sperm from entering a woman’s egg. The movie’s writer and director, Valerie Weiss, also has a PhD from Harvard Medical School, an achievement she’s now turned into a generic romantic comedy with a heavy science flavoring. The thrust is that Sam is unsure what to do after her fiance, Ben (Reid Scott), proposes. How can she trust that he’s the one? So he flies off to China on a fellowship, while she proceeds to speed around Boston and Cambridge turning her new love life into an experiment. Only after she’s met and dated other men will she know whether Ben is right for her.

This is a manic hour and a half. It’s full of pushy, grabby, assertive, borderline obnoxious characters, not all of whom went to Harvard. Sam’s mother (Lin Shaye), for instance, is a nag who insists that her daughter’s safety depends on the light-up Star of David hat she knitted for her. Sam’s college roommate and best friend (Kathleen Robertson) is an attorney whose idea of cheering her up after the break with Ben is a duck-boat tour. That woman is not a friend.

Weiss’s ideas about moviemaking, storytelling, and character development are indistinguishable from bargain-bin romantic comedies (so-called chick flicks) and television shows that barely last a season. It’s as if she didn’t trust herself to make an adult comedy about adult dilemmas and, instead, just made the most adorable, aggravating one she could. Even the scene in which a tantric sex instructor sprays himself all over Sam’s lab is cute. Unless, of course, you happen to be a member of Harvard Medical School’s custodial staff.

Written and directed by: Valerie Weiss

Rated: R (language and sexual content, some of which defies the laws

of physics and limits