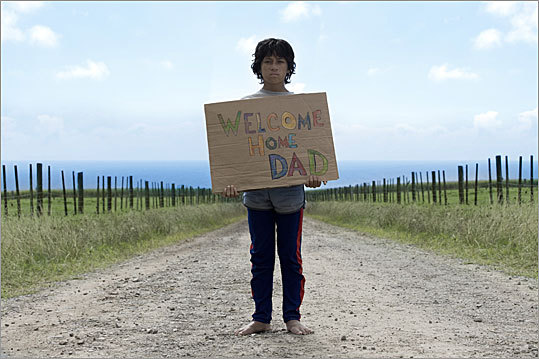 There are two coming-of-age movies about boys coping with flawed fathers that open in the Boston area today. “The Kid With a Bike,’’ from Belgium’s Dardenne brothers, is cool, calm, observant, and heartbreaking. “Boy’’ is everything that film is not: hyper-stylized, funny, a crowd-pleaser, and ultimately the lesser emotional journey. You could do worse than drag your teenagers to see it.

It’s the second film from New Zealand writer-director-actor Taika Waititi, whose 2007 debut, “Eagle vs. Shark,’’ was a sweet but laboriously quirky romance that was too easy to compare to “Napoleon Dynamite.’’ “Boy,’’ which seems the more personal project, is fairly easy to compare to “Son of Rambow,’’ the cheeky British comedy from 2007. Both films are set in 1984, when Michael Jackson was making the planet safe for the Moonwalk, and both are about misfit kids making their way in a farcically hostile world.

But “Boy’’ has a glib, fizzy energy of its own. The title character played by James Rolleston - Boy is his name, more or less - is a survivor whose big grin and puckish fantasy life mask genuine hurt. Living in a coastal Maori village with his grandmother and a horde of cousins, Boy has the run of his ramshackle Eden. He pines for the local beauty, Chardonnay (RickyLee Waipuka-Russell), helps his friends Dallas (Haze Reweti), Dynasty (Moerangi Tihore), and Falcon Crest (Montana Te Kani-Williams) harvest marijuana for the local biker gang, and waits for his father to come back from epic adventures abroad. Everyone knows Boy’s dad is in jail, but why spoil things?

Dad does in fact return: A rangy screw-up named Alamein, he’s played by the director, whose experience in stand-up and TV comedy gives him an electric visual edge. Arriving at the homestead with two ex-con friends even more hapless than he, Alamein busies himself and his son with searching for a bag of money he buried somewhere out in the back field. Once that’s found, Boy assumes they’ll set off together and the real adventures will begin.

The drama, of course, is in the kid’s disillusionment, which he shores up with increasingly desperate bravado. Rolleston is a charmer with an easy smile and infectious confidence, but the more interesting character may be his younger brother Rocky (Te Aho Aho Eketone-Whitu), who lives in a private world of dreaminess and pain. Assuming responsibility for the death of their mother (Ngapaki Emery) during his birth, Rocky imagines himself a secret superhero, his feats animated by the director in childlike flipbook passages. A deeper, richer movie might make him the central figure.

That might ask too much of Waititi’s magpie talents, though. “Boy’’ rollicks along with bright, sunny style and, for the most part, balances its sadness with invention. But you never lose the sense that the visual hyperactivity is a defensive maneuver, a way to address anxieties that are too hard for the director to look in the eye. Waititi’s an entertainer who also wants to move us, and the two halves are still fighting each other. When and if he figures out how to put them together, he may be a filmmaker to reckon with.