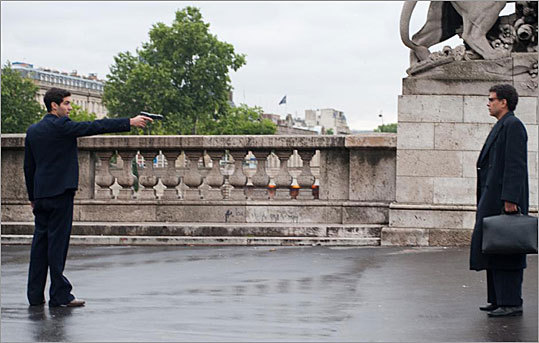 Tahar Rahim (left, with Christopher Buchholz) plays an Algerian in Paris during the Nazi Occupation who goes from questioning the Resistance to supporting it. (Film Movement )
By Mark Feeney Globe Staff / March 23, 2012
Text size – +

"Free Men’’ offers a textbook case of why movies shouldn’t be textbooks. Younes (Tahar Rahim), an Algerian in Paris during the Nazi Occupation, sells cigarettes on the black market. “Why fight?’’ Younes asks a cousin in the Resistance. “It’s not our war.’’ (Algeria at this time was a French colony.) The cousin replies, “I’m fighting for freedom in France today, Algeria tomorrow, and all North Africa.’’

It’s the sort of noble sentiment that animates “Free Men’’ (a pretty noble title, come to think of it). There are noble acts, too, centering on Algerian Muslims risking their lives to shelter Algerian Jews from the Nazis. But nobility with little pacing, imagination, or energy tends not to work too well on the screen. Rahim has the eyes of the young Mandy Patinkin. If only he had some of the wildness.

Younes finds himself fascinated by Salim (Mahmud Shalaby), a gifted singer of Algerian songs. Salim is Jewish. Younes and the rector of Paris’s Great Mosque, Si Kaddour Ben Ghabrit, try to protect him. Michael Lonsdale’s rector is the best thing in the movie. In his voluminous white robes and hat, he looks like the world’s least perturbable polar bear (the slyest, too) as the Nazi and Vichy French officials alternately flatter and threaten him.

Ben Ghabrit and Salim were real people. Younes is a composite. One sign of how “Free Men’’ can’t decide whether to be more fictional or factual is the oddity of the Paris where it takes place. This is the rare northern European city where it’s almost always sunny, birdsong fills the winter air, and even in November overcoats are rarely worn. The implausibility of this Paris might make more sense if “Free Men’’ were an Algerian production. But it’s French.

Implicitly and otherwise, writer-director Ismaël Ferroukhi raises interesting questions about the relationship between religion and national identity, nationalism, and immigration. A Nazi roundup of Algerians has an alarmingly contemporary and close-to-home feel - equally contemporary and close-to-home on both sides of the Atlantic. If Nicolas Sarkozy loses his reelection bid, why not run for governor of Arizona? But those issues don’t get addressed in any sort of compelling way.

There’s a lovely moment in the film when an imam leading a prayer service notices that the Nazis are about to capture Younes and a little girl (you won’t be surprised to learn that he comes around to his cousin’s point of view). The imam abruptly ends the prayers and sends his congregants into the courtyard, where their numbers swallow up Younes and his young charge. Precisely because the sequence is moving and visually inventive it’s also depressing. Watching it, you realize there’s been nothing else like it in “Free Men.’’

Written by: Ferroukhi and Alain Blanc

In French and snatches of Arabic, with English subtitles