Like boys with their toys: Documentary’s drummers never stop having fun 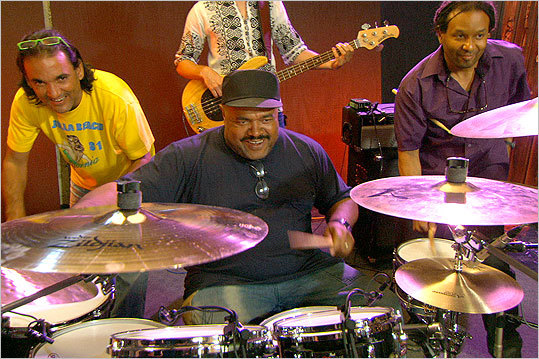 ‘The first drum, guess what it is?’’ Nasyr Abdul Al-Khabyr asks the aspiring percussionists at his Nasyrium 2008 Drum Camp. He pauses a beat. Having been Dizzy Gillespie’s drummer, Al-Khabyr knows something about beats. “That’s right, your heartbeat.’’

Heart and beats (in that order) define John Walker’s 2010 documentary about the camp, “A Drummer’s Dream.’’ Obviously, muscles and coordination are important to drumming. On the basis of Walker’s film, it would appear that having a great smile is, too. The various well-known professional percussionists who are on hand as faculty - Al-Khabyr, Mike Mangini (of the Waltham Manginis), Horacio “El Negro’’ Hernandez, Dennis Chambers, Kenwood Dennard, and conga players Giovanni Hidalgo and Raul Rekow - can beam with the best of them.

Why shouldn’t they? “This is an instrument,’’ Hernandez says, “that has a special and a total relationship with a kid. Somehow we have to manage to have that kid alive inside of us, always. Every time we sit at our instrument, this is to have fun.’’

Mangini, one of several of the drummers with a Berklee College of Music connection, puts it more succinctly - and vividly. As he tells a group of enthralled students, “It’s fun - whee - hitting stuff around the [drum] kit.’’ He ought to know. Mangini plays a kit the size of Delaware. Its sheer extent is startling, but nowhere near as startling as the sight of a drum kit being played on a lakeside dock. Walker isn’t shy about playing up the contrast between the camp’s idyllic setting and all the boom-boom-boom activity. If there’s one problem with the documentary, it’s that there are a few too many shots of the peaceful natural surroundings.

Nearly all the interviews are with the professionals. That’s fine, since these guys are almost as good at talking as they are at smiling, We do hear a few times from the kids, none of whom is credited. It would be nice to hear about their backgrounds, too. We know how the pros came to be at the camp. They are all pals of Al-Khabyr. How did the kids end up spending their week in rural Ontario?

Some of the drummers have great stories to tell. Hernandez, growing up in Havana, would cadge old X-rays from hospitals and use them to replace broken drumheads. Chambers recalls a concert when he was with Santana and noticed drops of blood on his kit. Had he cut himself? No, the blood belonged to Rekow, playing next to him. Chambers never would have guessed, though, from the intensity with which Rekow was attacking his congas. Maybe the single nicest thing in the movie is the look on Rekow’s face as he listens to Hidalgo talk. Clearly, the man is a gifted accompanist.

Hidalgo describes how he would practice when he was young. He would put on an LP and play along with it for two or three hours. Then he would have a drink of water and change the setting from 33 rpm to 45, still trying to keep up. Can we assume from his being here today that the turntable didn’t have a setting for 78 rpm?

Written and directed by: John Walker

At: Museum of Fine Arts through Sunday