An Oscar nominee with more rhythm than romance 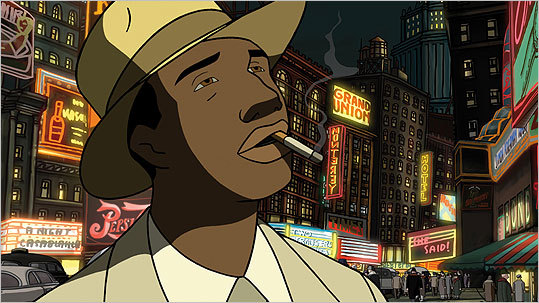 That “Chico & Rita’’ was Oscar-nominated for best animated feature this year says more about the lure of exotica and a weak crop of home-grown entries than anything about the film’s quality per se. A likable but cliched star-crossed romance set along the post-WWII Havana-New York jazz axis, the Spanish-made film features terrific music, passable artwork, and characters who stubbornly refuse to become more than sketches. It’s great that the pioneering distributor GKIDS is bringing offshore animation for families and grown-ups alike to Americans’ attention, but a must-see this isn’t.

Unless, of course, you have a taste for Cuban jazz and the rumba-fied polyrhythms that crossed over to the Manhattan bebop scene in the late 1940s. If so, the movie’s unquestionable star is Bebo Valdés, the 93-year-old pianist, bandleader, and composer whose music is the foundation upon which the drama dances. Aspects of Valdés’s career and rediscovery have been folded into the plot, giving “Chico & Rita’’ a warm, valedictory feel.

It could use the help. Co-written and codirected by Fernando Trueba (whose 2000 film “Calle 54’’ introduced the musician to modern audiences), the film tells the story of a gifted country-boy piano player named Chico (voiced by Emar Xor Oña) who comes to Havana and promptly falls in love with Rita (Limara Meneses), a girl from the slums with the voice of a jazz angel. The attraction is mutual (and there’s a discreet animated sex scene to prove it), but the course of true love takes six decades and several major cities to play out.

In the process, there are cartoon cameos by the likes of Charlie Parker, Dizzy Gillespie, Thelonius Monk, Nat King Cole, Bud Powell, the young Tito Puente, and the influential Cuban percussionist Chano Pozo, who meets his maker here as he did in life, in a bar fight over a bag of marijuana. Pozo is drawn and voiced (by Yaroldi Abreu) as a real devil, and he comes and goes much too quickly.

So fondly portrayed is this vanished world, and so exhilarating in its particulars, that Chico and Rita themselves are pallid outlines in comparison. The film’s visual strategy, overseen by codirector and storied Spanish artist-designer Javier Mariscal, places boldly outlined characters with minimal details atop urban backgrounds that are, if anything, over-drawn. The filmmakers were able to access archival photos of postwar Havana, and they re-create the streets down to the last sewer grating and shop sign. The movie’s visual ethnography is more stirring than its romance - generally a sign of trouble.

Again, you may not mind, so beguiling are the sounds and cultural memories rising from “Chico & Rita.’’ But when a soundtrack this fluidly elegant is married to trite dialogue, thin characterizations, and chockablock animation, it has to go down as a missed opportunity.

Unrated (as PG-13: cartoon nudity and sexual situations, some violence)