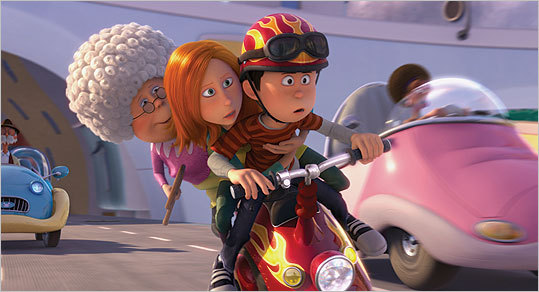 Sunday’s Academy Awards might have left the false impression that movie song-craft is dead. For bureaucratic reasons, there were only two nominees, neither of which was featured during the show. Both were from so-called family movies - “Rio’’ and “The Muppets’’ - and, in different ways, they were clever approaches to the musical number. “The Lorax’’ has a show-stopper that’s just as good and in some ways better.

The movie itself is a new, faintly faithful version of Theodor “Dr. Seuss’’ Geisel’s 41-year-old ecological cautionary tale. It’s been animated by the same company that made “Despicable Me,’’ which is to say you don’t know whether to watch “The Lorax’’ or lick it.

The song is a rock number called “How Bad Could I Be?’’ and it would have been high on the pop charts any time between 1988 and 1998. It sounds like something Roger Daltrey might have written for Head Start. At just about the halfway point, it arrives and deepens the movie’s tone. A pleasing tale about a boy (with Zac Efron’s voice) who sneaks out of his entirely plastic town to fetch a real tree for the willow of a girl (Taylor Swift) he loves transforms into a darker nightmare of modern industrialization. The song is full of gospel accents, warped voices, hints of Darwinism, and uses the word “biggering.’’

The singer is a character called the Once-ler. In flashbacks, he’s a sort of young Oakie whose invention - a multiuse garment called a Thneed - causes hysterical demand, which causes the Once-ler (Ed Helms) to break his promise not to harm the forest he shares with cuddly bears, goosey fowl, and amphibious goldfish. The vision of dystopia this number conjures feels defiantly grim for a movie where the trees look, as they do in the book, like freshly spun cotton candy. Written by John Powell, Cinco Paul, and Kool Kojak, it also brings out the book’s doomy undercurrent and has more layers and complexity than the movie around it. If I had a hard time sleeping, I don’t envy some parents.

The other numbers are good, too. They have wit and bite and, at least once, Auto-Tune. “The Lorax’’ has never been regarded as highly as ‘The Cat in the Hat’’ or “Green Eggs and Ham’’ and one assumes that’s to do with Dr. Seuss’s concern for a cause other than reading. It was a parable that, in becoming a film, has been literalized and commercialized. I don’t recall seeing the face of the Once-ler in the book. As a figure of industry, he didn’t need one, really. He was everywhere. The Lorax , meanwhile, was the keeper of the forest, this little orange creature with tremendous flaxen facial hair - a little bit walrus, a little bit wood nymph.

For the film, he’s got Danny DeVito’s voice and is rendered very much beside the point (even though he’s starring in all the movie’s decidedly anti-Lorax tie-ins for everything from a Mazda SUV to disposable diapers). After explaining how the Once-ler won then lost his empire and is currently living out a curse the Lorax levied, the movie turns into a chase adventure in which the boy, who’s now named Ted, presumably after Geisel, races to plant the last tree seed before he’s stopped by the synthetic town’s tiny mayor, O’Hare (Rob Riggle), which must be a pun on the black pageboy that curtains his face. (The hair clippers could only be set on “Korean dictator.’’) In other nonsense, Ted’s grandmother (Betty White) gets to perform X-Games tricks.

Cinco Paul wrote “The Lorax’’ with Ken Daurio (the directors are Chris Renaud and Kyle Balda; and the movie’s available, inessentially, in 3-D). Paul and Daurio also did 2008’s just-serviceable “Horton Hears a Who!’’ Their deviations from this book don’t stray terribly far from its spirit. Despite some schmaltz and pandering, this is a still a nifty feat of protest whose activism now comes mostly from songs. “Let It Grow,’’ insists the climactic town-wide number. Whether they’re singing about the environment or the mayor’s hair, you definitely want to do something to help.

Written by: Cinco Paul and Ken Daurio, adapted from the book by Dr. Seuss

Rated: PG (brief mild language, including a song about the destruction of nature)