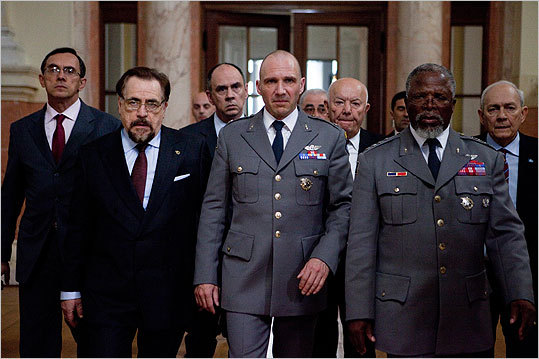 During the opening scenes of Ralph Fiennes’s scalding new adaptation of Shakespeare’s “Coriolanus,’’ you may look around in shock: Is this the evening news or what? Furious crowds surge through graffitied European streets burning cars and protesting austerity measures; riot squads wield deadly force with shield and truncheon; a cold-eyed strongman named Caius Martius (Fiennes) tells the mob they all can go to hell. This is not Greece, nor Egypt, nor Syria, but “a place called Rome.’’ Not coincidentally, that rhymes with “home,’’ which is where this movie thunderingly brings the play’s concerns.

The last of Shakespeare’s “Roman’’ trilogy (after “Julius Caesar’’ and “Antony and Cleopatra’’), “Coriolanus’’ doesn’t get staged very often. It’s easy to see why. To any society that values democracy and the will of the people, the play must go down like rotten milk. The hero is a military hard-ass who suffers for both his honesty and his desire for vengeance, while the good citizens of Rome are spineless, easily manipulated sheep. The play’s real villains are the senators - so it’s nice to see that some things haven’t changed.

The chaos of fifth century BC has been cleverly updated to the anytime of today by screenwriter John Logan. Senator Menenius, a wily old idealist played by Brian Cox, delivers his opening monologue via televised press conference. When Caius Martius heads into battle against the invading Volscians, we get 20-odd minutes of brutal street-fighting with RPGs and crackling automatic weapons. The film was shot in Serbia; dial a few decades back and it could have been set there.

Caius Martius returns as the scarred conquering hero of Corioles, for which he receives the honorific “Coriolanus’’ and instant elevation to the political post of consul. He could be Julius Caesar or Napoleon or Dwight D. Eisenhower ascending the throne, except for one thing: He refuses to court the people. Shakespeare was exploring the paradox of society’s attack dogs - the contemptuous warriors we ask to protect us and what we ask of them in return. Caius Martius is happy to rule, just not in the name of democracy, so is he a stronger man for it or a weaker public figure?

In any case, he’s overthrown - betrayed by a pair of sniveling politicians played by James Nesbitt and Paul Jesson - and throws in his lot with the Volscians, who are led by Gerard Butler as Aufidius, doing acceptably Shakespearean things with a vague brogue. Fiennes lets his character’s hair grow out during his exile but retains an unblinking sniper’s intensity - even with his nose, he’s a good deal more frightening than Lord Voldemort because the carnage he threatens feels real rather than computer-generated. What do we do with our necessary killers? Leave them outside the door, like John Wayne in “The Searchers’’? Chain them just out of danger?

Shakespeare (by way of Plutarch) offered a third option: Destroy them with notions of higher duty. As hard as Coriolanus is, Vanessa Redgrave as his mother, Volumnia, is steelier still, overjoyed to see her warrior boy return drenched in blood that “more becomes a man than gilt his trophy.’’ Shakespeare divided the play’s female roles between the meekly yielding - the ubiquitous Jessica Chastain as the hero’s wife, Virgilia - and the martial. And Redgrave uses the regality of her voice, her bearing, those cold blue eyes to take the latter to the bank. No one else in this play has the stones to ask Coriolanus to spare Rome. Redgrave’s Volumnia is a mother.

For all that, “Coriolanus’’ leaves an acrid, unfinished taste. Fiennes, making his directorial debut, gets into the meat of the thing, and he takes advantage of the bluntness of the text; even Shakespeare newcomers will be able to follow along. If this is one of the Bard’s least flowery plays, though, it’s also among the least tragic of the Tragedies - not everybody dies, for one thing - and the larger picture eludes the director-star.

Shakespeare threw the matter back to his hero’s hated plebes in the audience, but the final moments of this movie feel small and disengaged. Fiennes knows there are plenty of Caius Martiuses in real life - again, look to the news. He just isn’t sure what to do about them.

based on the play