He shows us the money

‘Contraband’ isn’t art, but it cashes in with plenty of Mark Wahlberg 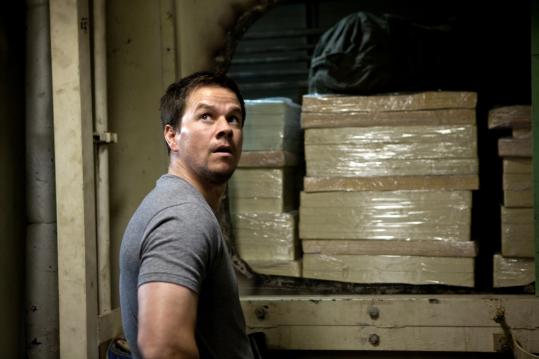 Mark Wahlberg spends much of his time in “Contraband’’ on a barge trying to bring counterfeit cash into New Orleans. (PATTI PERRET/UNIVERSAL PICTURES via ap)
By Wesley Morris Globe Staff / January 13, 2012
Text size – +

The ads for “Contraband’’ have Mark Wahlberg lifting his shirt just enough for us to see stacks of cash strapped to his torso. But putting money around Wahlberg’s abs is redundant. Fortunately, the image doesn’t repeat itself in the finished movie. He spends a lot of “Contraband’’ shirted, intense, and on a barge full of shipping containers, trying to smuggle much counterfeit cash into New Orleans, where his character, a reformed crook named Chris, installs residential security systems. That’s such a specific job for a crook to have that you know the screenwriters cooked it up in order to use it later on. It’s the same thing with putting the hothead Ben Foster, who plays Sebastian, Chris’s best friend and former smuggling partner, on the wagon. How long until he falls off?

This is an easygoing caper movie with some nasty violence, several plot holes, and a central scheme I couldn’t follow. But, really, all I had to do was keep track of the giant shrink-wrapped packets of cash. (Who knew money could also look like a box of doughnuts?) Otherwise, I don’t know that a big shootout between the police and some thieves in Panama makes sense. I don’t know that a lot of “Contraband’’ makes sense. But I’m not sure that it has to. The director Baltasar Kormákur carries the movie off with efficiency, brutality, and humor. This isn’t a work of smoothness or style. At some point, a highly valued Jackson Pollock painting is used, winkingly, as a tarp. So we know that “Contraband’’ isn’t a work of art, either.

The scenes seem to knock into each other rather than connect. And the rhythm is jerky like too much traffic at an intersection with absurdly long lights. It’s amateurish that way. But there’s a conceit here that’s very appealing. We’ve seen so many movies rely on dockyards and shipping containers as theater for easy, inexpensive movie action that it’s become a setting of pathetic first resort. “Cars 2’’ recently managed to honor and mock the problem by staging its opening sequence at a shipyard. A cartoon choosing to do that is funny. A Steven Seagal movie doing the same is not. “Contraband’’ manages to use the containers to play an elaborate shell game with their contents. Every time a set of metal doors swings open you feel “Let’s Make a Deal’’ suspense.

The reason Chris has reentered the smuggling business is silly but hard to contest. His kid brother-in-law (Caleb Landry Jones) unloaded drugs he was smuggling before US Customs caught him. The intended receiver keeps threatening to kill him unless he gets his money. Giovanni Ribisi plays the thug, Tim Briggs. He does so with a gnarled, backwater accent and an air of filth. Rarely has an actor’s role seemed so indistinguishable from the ring around a bathtub. Tim is a junkyard dog. He barks at Chris’s sexy, beautician wife (Kate Beckinsale) and harasses his two sons, who will likely need an amazing therapist when this is all over. So the stakes are clear, even if the mechanics of lowering them are not.

There are parts here for Diego Luna, J.K. Simmons, Lukas Haas, and a likable guy named Lucky Taylor. They and almost everyone else are underused, no one more so than Beckinsale, who, even by the usual standards of action-thriller wives, has an embarrassing and thankless role.

Some of the illogic in “Contraband’’ might stem from the film’s being a remake of a 2009 Icelandic movie. Some of it might stem from the possibility that “Contraband’’ needs more polish than Kormákur, working from Aaron Guzikowski’s script, provides. It might require the high drama and atmosphere that a director like James Gray might have lent. This movie is a poor cousin of Gray’s “We Own the Night’’ and “The Yards,’’ both of which star Wahlberg.

In “Contraband,’’ he makes intensity and stress look simple. We know we’re watching trash. But far more so than in “Shooter’’ and “Max Payne,’’ which no one saw, we’re watching it for him. We don’t simply root to see this crook survive. We want to see him win. Which means Wahlberg has fully come of age as a low-life star.

Written by: Aaron Guzikowski, based on the film “Reykjavík-Rotterdam”” written