This ‘Woman’ tells a feminist tale of horror 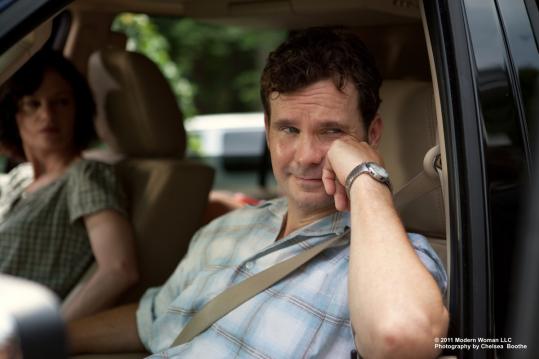 Subtle as a mugging and gleefully outrageous, “The Woman’’ is a feminist parable disguised as a sicko midnight horror movie. The doctrinaire and the squeamish should stay very far away, but the film does live up to (or down to) its ambitions to gore the patriarchy while giving high-minded fans of low-budget swill a bloody good time.

The director is Lucky McKee, still coasting on the fumes of his 2002 cult horror drama “May’’ (whose star, Angela Bettis, turns up here in the role of the family’s shell-shocked soccer mom). He’s a ramshackle stylist, which means you’re never sure where “The Woman’’ is going next. It begins by following the feral title character (Pollyanna McIntosh), who was apparently raised by wolves in the woods of central Massachusetts and remains in an atavistic state. Look, they have coyotes in Jamaica Plain. It could happen.

(To be precise, “The Woman’’ was filmed in the towns and woodlands around Greenfield, after being denied tax credits to shoot in Michigan. Their loss, our gain, or something like that. The film is screening for one week only in Salem, not having quite the momentum to crawl all the way to Boston.)

The Woman is captured and held prisoner by Chris Cleek (Sean Bridgers), a country lawyer and weekend hunter whose aw-shucks manner hides the psychology of a classic abuser. Wife Belle (Bettis) is a numb enabler, daughter Peg (Lauren Ashley Carter) carries a terrible secret, and son Brian (Zach Brand) is a dutiful student of daddy’s sadistic ways. “Don’t do anything I wouldn’t do,’’ Chris tells him in one scene, which leaves an awful lot of latitude.

McIntosh gives a ferocious performance as the Earth-Goddess, or Lilith, or psychosexual Id chained in this family’s root cellar. She growls and speaks in tongues, clearly imagining the worst kind of revenge. McKee is glad to oblige, and while the first half of “The Woman’’ is probably too slow-boiling to satisfy the gorehounds in the audience, the director lets fly with the entrails and a few deranged surprises before the end credits roll.

If a conceptual gross-out like this is going to work at all, it had better be sure of its tone. “The Woman’’ isn’t, or not enough. Too many of the scenes fall off the balance beam separating drama and parody, and the pop-metal soundtrack songs often get laughs for all the wrong reasons. On the plus side, while the film visits extreme violence on its female characters (including a naively well-intentioned math teacher played by Carlee Baker), at no time are we invited to voyeuristically join the “fun.’’ On the contrary, we can’t wait for Chris to get his gruesome comeuppance.

Fans of underground culture may remember a legendary 1971 R. Crumb comic called “Whiteman Meets Bigfoot,’’ in which a stressed suburbanite retreats to the forest to find spiritual and sexual bliss with a female Sasquatch. “The Woman’’ turns that idea inside out in ways that are both laughable and impressively blunt. “That is not civilized behavior,’’ Chris yells after his captive has bitten off one of his fingers in a fit of pique. As far as the filmmakers are concerned, civilization deserves whatever it gets.

Written by: McKee and Jack Ketchum, based on their novel