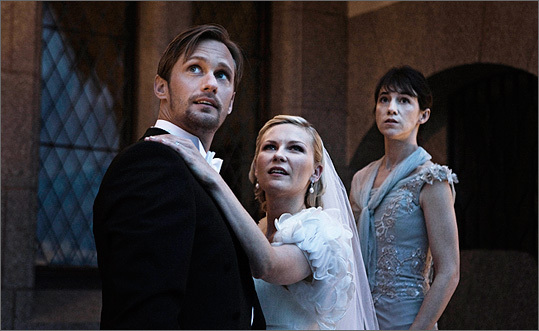 Watching “Melancholia’’ is like being stuck next to a brilliant depressive at a dinner party. The food is exquisite, the conversation scintillating, and the longer you sit there the more trapped you feel in another man’s all-encompassing gloom. It’s possible to get great cinema out of bleakness - Ingmar Bergman made a career of it - but the Danish filmmaker Lars von Trier is so certain of his misery that his films run the risk of turning smug. His blues are better than yours, and “Melancholia’’ is a gorgeous, boring bummer.

For all that, Kirsten Dunst gives the performance of a lifetime as, more or less, the director’s stand-in. The movie is divided into two parts, each named for one of the sisters at its center. The first, “Justine,’’ takes place at a wedding reception and it’s ostensibly about celebration; in fact, the subject is the failure of hope. Everyone wants to party except the bride, Justine (Dunst), a vision in white who keeps slipping out the side door of the mansion to commune with the moon and weep for humanity.

Her sister, Claire (Charlotte Gainsbourg), tries to keep the trains running even as the reception slowly gives way to entropy, the bride’s mother (Charlotte Rampling, magnificently dour) issuing pronouncements of doom, the bride shagging one of the guests (Brady Corbet), the groom (Alexander Skarsgard) tossing in the towel. Gainsbourg’s nervous optimism has never seemed so fragile or foolish; Dunst, who runs the gamut from glowing to grief-stricken, calls to mind the Bertolt Brecht quote, “He who laughs has not yet heard the terrible news.’’

The movie’s second half is the terrible news. A planet named Melancholia is hurtling toward Earth and our immolation is nigh. Where Dunst’s Justine was the odd woman out in the previous evening’s festivities, she’s the queen of the mourning after, even as Claire and her husband, John (Kiefer Sutherland), and their young son Leo (Cameron Spurr) come increasingly unglued. This section of “Melancholia,’’ titled “Claire,’’ is about the triumph of pessimism, and it’s a painstaking vision of bourgeois complacency unraveling in the face of oncoming annihilation.

Honestly, though, Bergman did it better - with more empathy and sorrow - in 1968’s “Shame,’’ and so did Michael Haneke in 2003’s “Time of the Wolf.’’ By comparison, von Trier is an adolescent doodling in his notebook, railing against the cosmic cluelessness of mommy and daddy. His doodles just happen to be stunningly beautiful. “Melancholia’’ has been filmed with a pointillistic hyperrealism by cinematographer Jürgen Jürges; the images seem at times as if they could come from a high-concept fashion magazine: Women’s WeltschmerzDaily.

The movie begins, in fact, with an unearthly series of tableaux that summarizes the plot in miniature, and once you’ve seen that, the remaining two hours belabor the point. The director’s last film, 2009’s “Antichrist,’’ was even more lunatic, but at least it went somewhere, deep into the psychosexual muck separating men from women. “Melancholia’’ just vamps endlessly on nihilism, and all that keeps the movie from disappearing up its own rabbit-hole is Dunst’s godlike serenity in the final hour.

Von Trier is possibly the most annoying, most self-indulgent filmmaker currently working (not to mention a master of public self-sabotage, as witness the overblown furor over his “Hitler’’ comments at Cannes last May). He also has gifts that are impossible to ignore, including a knack for torturing actresses into performances of regal, extreme beauty. Plenty of demanding moviegoers will look at “Melancholia’’ and call it Art. I say it’s spinach, and I say the hell with it.