As a serious legal thriller, ‘Puncture’ has plenty of holes 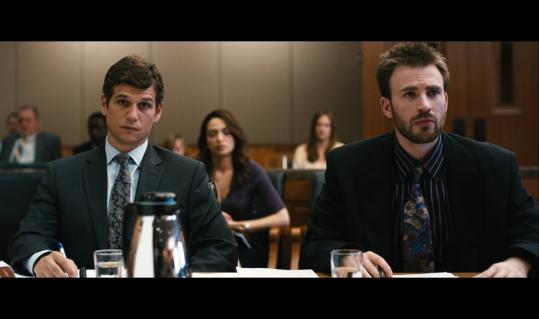 “Puncture’’ joins this genre of scrappy-underdogs-taking-on-corporate-malfeasance films. Here, two Houston personal injury lawyers, high school buds Mike Weiss (Chris Evans) and Paul Danziger (codirector Mark Kassen), accept the case of an ER nurse (Vinessa Shaw) who’s been pricked by an HIV-contaminated needle on the job. Her friend, a local entrepreneur (Marshall Bell), has been mysteriously unsuccessful in selling his “Safety Point’’ syringe to hospitals. This is the late 1990s, before retractable needles are in use. This invention could save thousands of lives, but a corrupt arrangement between hospital purchasing cartels and a pharmaceutical giant is blocking the needle’s path to the marketplace.

Audiences love to watch Goliath stumble and fall, especially when that giant is real. Like “A Civil Action’’ and its ilk, “Puncture’’ is based on an actual court case. But is this a story best served by focusing on the legal battle or the arc of Mike’s flawed hero?

Kassen plays the sensible, furrowed-brow Paul. Evans (Sudbury’s own “Captain America’’) brings an intensity to his portrayal of Mike, a self-destructive, narcissistic idealist. Upping the ante: Mike is also a functioning drug addict. After his own needle-sticking or pill-popping binge, he calls Paul at 2 a.m. with brilliant case insights. To practice for court appearances, he persuades his druggie friends to role-play witnesses on the stand.

Whether Mike will show up for the deposition after snorting coke with the paralegal in the parking garage provides tension. Yet we never learn the names of the demons haunting him. No meaty scenes to flesh out the friendship between Mike and Paul, either. In one implausible scene, after Mike hits rock bottom, a doctor tells Paul his friend is “a pretty heavy user.’’ Paul replies, “I had no idea.’’ In place of any sort of explanation, codirectors Kassen and his brother Adam Kassen give us dreamy time-lapse shots of the Houston skyline.

This story of how corporate interests collude against the common good is surely worthy. But you might ask if the facts of the case might have made a better documentary, not a drama.