Enter ‘Trespass’ at your own risk 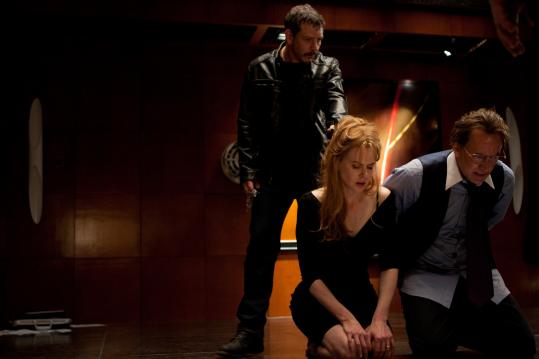 The movies are ever ready with answers for questions we didn’t know we had.

What, for instance, would happen if Nicolas Cage and Nicole Kidman played a fraying married couple in a domestic-terrorism thriller directed by Joel Schumacher, the man who made “Batman & Robin’’ and “The Phantom of the Opera’’? What if the home invaders wore masks that made them look like sexy sock monkeys? What if nothing the couple or the invaders said or did made any sense - except for a line like “No!,’’ which was said a lot and said everything?

Well, I’m afraid the answer is “Trespass,’’ one of those movies that an audience knows is terrible the minute it starts.

You see Nicolas Cage pull up to a gated lakeside mansion in a sports car and you can just tell: Oh, Lord. His hair looks bad. He looks tired. He’s talking business on the phone a mile a minute but not enough of the shots confirm that his mouth is moving when he speaks. Then, in a quick save-it-for-later shot, he puts a pair of handcuffs in one of the car’s compartments. When he walks jabbering through the front door and sees Kidman standing there looking fresh and happy while chopping vegetables and arguing with a teenage daughter (Liana Liberato), you know a horrible mistake’s been made.

Nicole Kidman doesn’t do vegetables. And how does a woman who seems as serene as she is wind up with a man who, with those Dick Cheney glasses, that con-man grin, and clammy complexion, looks a bit like a basket case? If you don’t believe that, then once the thugs - Cam Gigandet, Dash Mihok, Jordana Spiro, and the insinuating Australian actor Ben Mendelsohn, trying a soupy American accent - show up looking for cash and prizes, you can’t believe anything else.

Some of us still remember what happened the last time Schumacher and Cage and Schumacher and Kidman got together: “8mm’’ and “Batman Forever,’’ respectively. “Trespass’’ is 91 minutes of salt in a wound. During a preview screening, a few people in the audience tried to find Cage’s increasingly sweaty assertions funny, and they are in his customized ridiculous way. But what choice does an audience have? Anything to keep from sleeping. Schumacher tries to keep us awake by having the cast do a lot of screaming. We want entertainment, not an alarm clock.

The only reason for the movie to exist appears to be the Shreveport, La., home that most of the movie is set in. And even then there’s so much night action that the talented cinematographer Andrzej Bartkowiak can’t do much with it. The plot makes pathetic twists, then comically desperate ones. And there’s nothing kinky or perverse or psychotic in Eli Richbourg and Karl Gajdusek’s script.

It’s not “Cape Fear’’ or even, God forbid, Rod Lurie’s “Straw Dogs’’ remake - Schumacher doesn’t have the ego to make a movie as bad as “Straw Dogs’’ even though it always feels as if he’s begging to differ. Here you don’t know who’s less worthy of your enthusiasm, the thugs or the rich people. You wouldn’t mind seeing them all locked up.

R (violence and terror, pervasive language, and brief drug use)