Tale of a gifted musician who got left behind 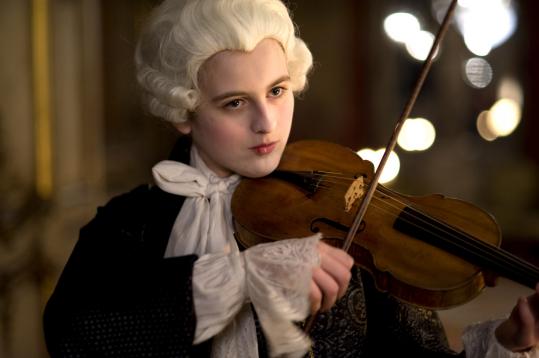 Those who stand too close to fame usually get swamped by it. Yes, Mozart had a sister, Anna Maria, nicknamed Nannerl, and the sneaking historical suspicion has always been that if she’d been a man we might speak of her in the same breath as her brother. A gifted pianist, violinist, and singer five years older than Wolfgang, she crisscrossed 18th-century Europe as one-half of a musical freak show staged by the children’s stage-manager father, Leopold Mozart. When she reached marriageable age, she was taken off the road. She composed pieces, but none has survived.

There’s a lot of what-if there, and at least five novels have speculated about Nannerl’s inner life and outer talents. “Mozart’s Sister’’ is the first film on the subject, and it’s an alternately rapturous and frustrating experience. Writer-director René Féret captures the period in all its candlelit paradoxes, emphasizing the gulf between the middle-class Mozarts and the bejeweled royalty they entertain. The teenage Nannerl (Marie Féret, the director’s daughter) and little Wolfgang (David Moreau) play like brilliant wind-up toys, but only in their private quarters do they get to horse around like kids.

The movie fantasizes about that gulf being bridged. Actually, it could be Nannerl’s private fantasy as she plies the keyboard and looks out at all those princes. The family is forced to stay in an abbey when their coach breaks down, and there the girl meets and is befriended by King Louis XV’s three youngest daughters. The bond between her and Louise de France (Lisa Féret, another of the filmmaker’s children) is charged with eerie otherness, halfway between sex and religious passion.

This leads Nannerl to the princess’s brother, the Dauphin (Clovis Fouin), an adolescent monarch-in-training mourning the death of his first wife in childbirth. So much of “Mozart’s Sister’’ is theatrical - the boy’s clothes Nannerl wears when first meeting the Dauphin, the grief that for him is both real and acted out - that, by contrast, music is the one area where the two can speak directly to each other.

It’s a lovely dream that, in the end, feels too dreamlike. The director coaxes an intentionally passive performance from his daughter Marie, so that Nannerl’s eventual waking to cold patriarchal reality doesn’t sting as it might. That none of these meetings ever occurred - in reality, the Dauphin was 22 years older - ultimately renders the movie a metaphor, and it’s never clear for what.

The music, as always, atones.

Written and directed by: René Féret

Unrated (as PG: repressed sexuality with wigs on)