‘Courageous’ aims for the heart with a too heavy hand 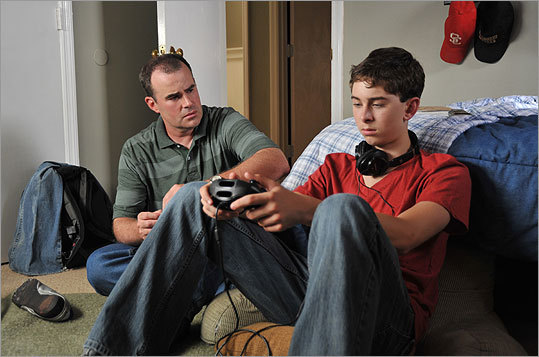 "Courageous’’ is a movie with a good-hearted aim: preaching the importance of fathers to their families, and the responsibility that comes with it. But it’s also a movie brought to you by Affirm Films, Pictures’ religious-demographic division, meaning that a certain amount of the preaching is literal. It’s a blunt approach that filmmaker and lead Alex Kendrick (Kirk Cameron’s “Fireproof’’) need not resort to as much as he does, given the ability he can flash for sentimental drama, not to mention wry humor.

Kendrick plays Adam Mitchell, a Georgia sheriff’s deputy dealing with the usual push-pull of balancing work and family. Adam sure meant to make it to his young daughter’s recital, but he had reports to file; he would run that 5K with his bonding-starved teenage son, but, ahhh, he’s 40. Meanwhile, newly arrived deputy Nathan (Ken Bevel) is determined to make sure his daughter doesn’t date, and blue-collar dad Javi (Robert Amaya) just wants to find honest work. All of which seems either unimportant or all the more important when tragedy hits the group, prompting them to craft a written resolution to be all that they can be, paternally speaking.

We would call Adam’s crowd introspective, except that their meaningful conversations are too often just narrative-suffocating devices for stressing a point. At a cookout, the guys discuss a workplace memo citing statistical connections between absentee dads and juvenile crime. Nathan, recalling his own youthful trials on this score: “If it weren’t for my faith. . .’’ It’s like characters breaking into song in a musical: It takes a certain touch to pull it off, and here, the serviceable cast just doesn’t have it in them.

And yet, they do sometimes shine. For all Kendrick’s stolidity, he delivers a couple of wrenchingly tender scenes. He also has a fun mistaken-identity exchange with Amaya that’s like a “Who’s on First?’’ routine. An opening auto-theft sequence involving Bevel is skillful and tense, and nicely sets up the story’s protector themes. If the film trusted in these elements more, it might play like, say, “Soul Surfer,’’ a more polished Affirm release content to do its uplifting gently.

At: Boston Common and suburbs