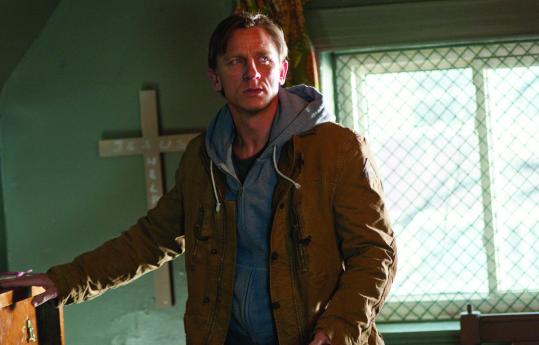 There’s a clever episode of “30 Rock’’ in which Connecticut shuts down production on a horror movie because the state deems it unflattering; but Jack Donaghy, representing the studio, presses on. The result is torture-porn that’s also tourist friendly. One wonders whether and how hard the state worked to stop “Dream House,’’ a tediously nonsensical movie that makes the legal system and common psychiatric sense subject to the whims of bad screenwriting.

Daniel Craig and Rachel Weisz trade Manhattan for suburban New England bliss. Naomi Watts lives across the street. Something clearly happened in the house they’ve bought, but Watts won’t say. She can’t because it’s That Sort of Movie. No one can say anything clarifying until, of course, everybody has to say everything. So we spend 50 exasperating minutes asking questions. How, for instance, could Craig and Weisz not hear a vanload of drunken goths playing séance in their basement? Do those goths have agents? Because they’re pretty good art directors.

Why is a discovered roll of microfiche the closest anyone gets to the Internet or a library? Why does Martin Csokas, who plays Watts’s husband, hate Craig so much? Why doesn’t Weisz share any scenes with Watts, even when they’re a staircase away from each other? How can Craig get any serious housework or home repairs done in such tight selvage denim? Does a book publisher as successful as the one Craig appears to be have no helpful connections in the area? What’s Elias Koteas doing on that commuter train? It’s been 45 minutes, when do we see him again?

What are these actors and the director Jim Sheridan doing in “Dream House’’ (which wasn’t screened for critics)? In Craig’s case, it’s to do more refrigerated acting. I imagine he liked the plot twist in David Loucka’s script. The twist is meant to answer most of these questions. I just wonder how Sheridan was able to communicate any of it to the actors: “Rachel, stand here looking fabulous among these computer-generated flames. OK, try doing that while leaning against the wall.’’ He might have been drawn to the chance - after “In America’’ and “Brothers’’ - to work with another pair of oppressively adorable girls (Taylor and Claire Geare play Craig and Weisz’s daughters). He likes them too much for a movie that needs them to be expendable.

The film itself needs a genre it can trust. Loucka has written a murder-mystery psycho-divorce thriller with overtones of horror and movie-of-the-week melodrama. What does a director as earnest as Sheridan do with that? At some point, Watts shows up at Craig’s door and says, “ I brought you some stew.’’ But it’s too late, Naomi. You’re starring in it.

Rated: R (some violence of the psycho-with-a-gun variety)