My Afternoons With Margueritte 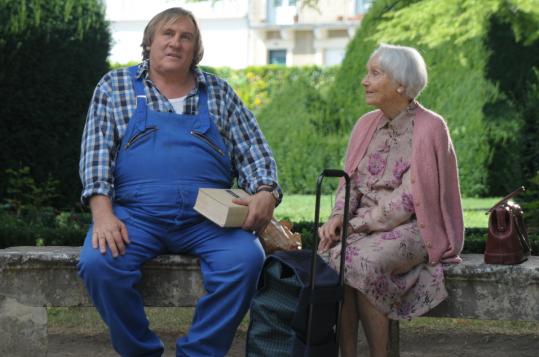 He’s playing a small-town handyman named Germain Chazes. Germain lives in a trailer across the garden from his mother (Claire Maurier) who’s demeaned him from the day he was born. Years of bad parenting and worse schooling have left him feeling like a simpleton. He’s a poor reader. He gnaws on sandwiches and talks while he does. He can be crude and has a big mouth. But his heart is bigger.

That’s why you cast Depardieu in a movie like this. It’s determined to look on the bright side. The film isn’t about the actor’s intelligence. It’s about his emotional radiance.

Germain forges a bond over park pigeons with a tiny, elegant older woman named Margueritte (Gisèle Casadesus). Her father, she offers, was a poor speller and added an extra “t’’ to her name. Germain and Margueritte meet regularly on the same park bench and fall in a kind of love. He’s the son she never had. She’s the mother we know he deserves.

With Margueritte, Germain’s galaxy of women expands to three. Sophie Guillemin plays Annette, his girlfriend, a strong, doting bus driver, and they have an easy, natural connection. You know exactly what she sees in this large, gentle man. It’s what we see: how sexy his compassion is. His mother’s hurt him. But Margueritte and Annette work to undo the damage.

Some of what occurs could have been predicted, but Jean Becker, who directed and co-adapted this fine little movie from Marie-Sabine Roger’s novel, doesn’t force anything. The scenes that pair Germain and Margueritte are certainly tutorial (they read the classics: “The Plague,’’ Romain Gary’s memoir), but they’re enriched by the different but mutual need that flows between them. It’s a familiar dynamic - “My Afternoons With Margueritte’’ would be the silver lining on a double bill with “Precious,’’ another movie about literacy and ludicrous parenting. But most of what we see feels exactly right. The men are loutish, and Germain’s mother is a garish gorgon, but even she turns out not to be completely terrible.

There’s a savory charm in the relationships among the handful of average guys who seem to live at the neighborhood restaurant bar. They tease Germain when his afternoons with Margueritte threaten to turn him erudite - his new vocabulary matches the flowers on his showiest shirt. They also care enough to distract or shut him up whenever he’s on the verge of putting his foot in his mouth. Everyone here is a delight, even Maurier who, with the cigarettes, braying, and clownish maquillage, might be enjoying herself too much.

But operating on the quiet side of his stardom, Depardieu moved me most. We tend to think of him at his best when he’s pouring it on. Here, he holds the sauce and gets as much done.

Germain isn’t slow. He’s badly educated and self-doubting. When he tells Annette he’s not smart enough to be a father, Depardieu says so as if that belief couldn’t be overcome.

MY AFTERNOONS WITH MARGUERITTE

Written by: Becker and Jean-Loup Dabadie from Marie-Sabine Roger’s novel

In French with English subtitles

Unrated (some explicit but complimentary sex talk and a nasty mother)