I Don't Know How She Does It 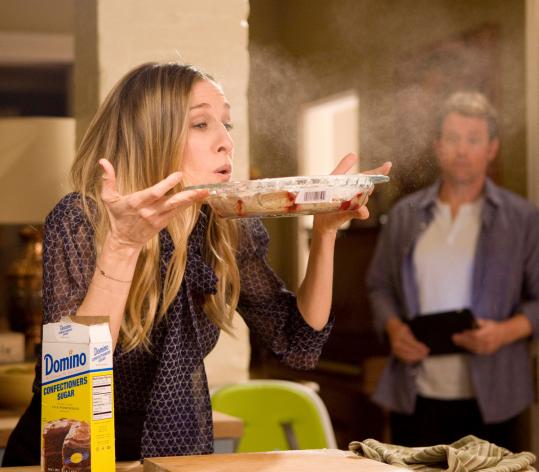 Sarah Jessica Parker (with Greg Kinnear) plays a harried working mom in the comedy “I Don’t Know How She Does It.’’ (The Weinstein Co.)
By Hayley Kaufman Globe Staff / September 16, 2011

The reality of it all can be so ridiculous, so depressing, and so hilarious that it doesn’t take much dressing up, even for the big screen. Too bad then that the new comedy “I Don’t Know How She Does It’’ occasionally veers so far into absurdity that it manages to make its central character - capable, smart, working mom Kate Reddy - look like a nitwit.

A blur of unbrushed hair, food-spattered clothes, and toy-stuffed handbags, Sarah Jessica Parker plays Reddy, a high-powered financial analyst living in Boston with her two small kids and an endearing if somewhat oblivious husband (Greg Kinnear). Life is harried but tolerable. Ever the overachiever, Kate jolts awake nightly and whiles away the time making mental lists, enumerating all the things she needs to do, none of which include the obvious: “Find a therapist and learn to set some boundaries.’’

In fairness, that’s a hurdle for any working mom who wants to be a committed employee and a supportive, present parent. Kate is determined to be both, even when she has to fake it. For the school bake sale, she “distresses’’ a store-bought pie and passes it off as homemade. When she runs late for work, she tells her boss (a reptilian Kelsey Grammer) she was off getting a mammogram.

If Parker ever let a moment of exasperation or frustration seep into this juggling act, “I Don’t Know How She Does It’’ might boast a hint of verisimilitude. Instead, she plays Kate as preternaturally perky, with never a cross word or a raised eyebrow for anyone. How did she manage to survive the shark-infested waters of finance and land such a big job? We have no idea. When her assistant, the steely Momo, played by Olivia Munn, looks at her with disgust and derision, why does Kate not wag a finger and tell her to step off? How about pointedly asking hubby to buy a tube of cookie dough for the ol’ bake sale?

Of course, that might round out Parker’s portrayal and get in the way of her I-can-do-it-all kookiness. Hollywood, after all, remains convinced that SJP is at her best when she’s kooky. That may have been the case a decade ago, when Carrie Bradshaw and “Sex and the City’’ were cultural touchstones, but the act has worn as thin as the heel on a pair of Jimmy Choos.

OMG! Kate accidentally sends an obscene e-mail to a Wall Steet titan (Pierce Brosnan) she has a meeting with! She catches lice from her kids and can’t stop scratching during her presentation! Whoops! But, guess what - the titan likes her spunk and she lands the deal! Woot woot!

I’m sorry. Did I just doze off and wake up back in the mid-’80s? Apparently, the only way to make this overscheduled mom palatable is to erase any trace of snark and turn her into a dingbat, a far cry from the Kate Reddy first popularized in Allison Pearson’s 2002 novel, upon which the movie is based.

There are occasional flashes of something better here, mostly in the confessional one-liners delivered by supporting cast members. As a judgey stay-at-home mom, Busy Philipps is spot on in an opening scene but is then relegated to catty asides delivered from the gym treadmill. Munn utters one of the funniest lines in the film but sadly never gets a character to play. And Kinnear, promising in glimpses, doesn’t get much to do here aside from staring in loving amazement at the always-smiling Kate.

Likewise, this reviewer didn’t have much to do either - unless you count rolling my eyes.

Hayley Kaufman can be reached at hkaufman@globe.com.

I DON’T KNOW HOW SHE DOES IT

Written by: Aline Brosh McKenna, based on Allison Pearson’s novel