A cry in the wilderness over spilled raw milk: ‘Farmageddon’ is marked by one-sidedness 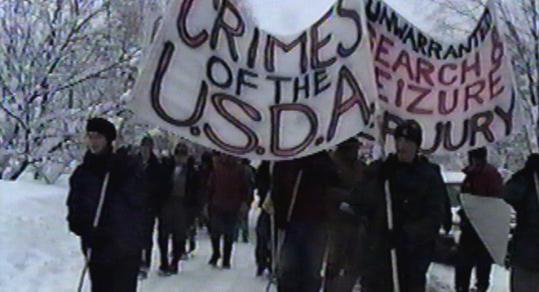 ‘Farmageddon: The Unseen War on American Family Farms’’ marks the directorial debut of Kristin Canty, a Concord mother of four. Canty’s more interested in advocacy, though, than filmmaking.

That isn’t to say the film is negligently made. Canty intersperses appealing shots of green markets, small farms, and the like with numerous talking-head interviews. She includes some startling video footage of raids on small farms and co-ops that have been accused of violating state or federal agricultural regulations. The sight of a policeman, Glock drawn and at the ready, surrounded by produce is not a sight easily forgotten.

The documentary’s title declares its stance: local, sustainable, and organic = good; factory farm and agribusiness = bad. More specifically, the US Department of Agriculture and state departments of agriculture = bad, too. Their restrictions on and/or outright prohibition of selling raw milk are tops among Canty’s complaints. She comes by her views through personal experience. Her 4-year-old son suffered from asthma and various allergies, all of which stopped bothering him once he started drinking raw milk.

“Farmageddon,’’ Canty says on the film’s website, “is in no way meant to convince anyone to drink raw milk, or eat grass fed beef, but rather [is] an argument to allow those that want to make those choices to do so. It is simply about freedom of food choice. The government needs to stop harassing small farmers, private food buying clubs and co-ops. Without food freedom . . . we are not free.’’

“Food freedom’’ is a striking, because somewhat odd, phrase. It has sort of a Tea Party sound to it; in fact, US Representative Ron Paul makes a very brief appearance among the documentary’s talking heads, nearly all of whom are farmers and advocates. “Food freedom,’’ one could argue, begins not with freedom to choose but ability to afford - there are subsistence consumers no less than there are subsistence farmers - but Canty’s focus is on liberty rather than economics.

Some of the stories she relates are almost as startling as seeing that cop with a Glock aimed at watermelons. The Faillaces are a Warren, Vt., couple who wanted to start a sheep dairy with imported animals from Europe and New Zealand. The USDA went after them, eventually confiscating their sheep and destroying them, ostensibly because of fears of mad cow disease. Canty relates similar stories of government hounding - of a dairy farmer in upstate New York, a Mennonite farmer in Pennsylvania, food co-ops in Ohio, Georgia, and California.

These government actions seem at once petty, irrational, and slightly sinister (the presence of “war’’ in the subtitle is not meant frivolously). What could the USDA or state agencies have had in mind? We never do find out. If passion is the great strength of “Farmageddon,’’ one-sidedness is its great weakness. We hear from a woman who works for the Maryland Department of Health and Mental Hygiene’s Center for Milk Control, and Canty notes with regret that other government officials wouldn’t talk to her. She even attempts a gotcha sequence, reminiscent of Mike Wallace in the early days of “60 Minutes,’’ in which she and a camera operator enter an office of the New York State Department of Agriculture and Markets to ask why no one there will discuss its shutting down of a dairy farm near Ithaca that was selling yogurt made from raw milk.

Clearly, Canty sees these agencies as the enemy, and maybe she’s right about their having it in for alternative agriculture. They certainly don’t seem to be sending police squads to any Tyson or Hormel facilities - and artisanal raw-milk dairy products ain’t a patch on the “fecal particulate dust,’’ as one person in “Farmageddon’’ notes, that fills football-field-size poultry feedlots. But the first step in defeating an enemy is getting to know his nature - in finding out if he really is an enemy. The one-sidedness of “Farmageddon’’ isn’t just an artistic failing. It’s an argumentative failing, too.

Written and directed by: Kristin Canty