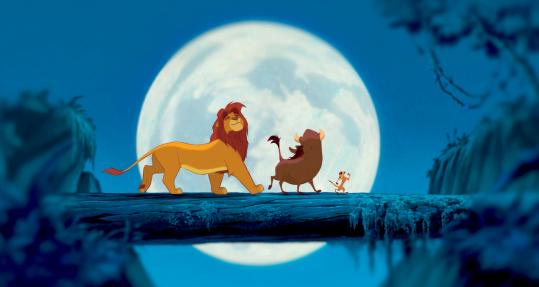 The Lion King is showing his age.

In the great Circle of Life that is the marketing machine - in which the company’s legendary animation jewels are re-released to theaters and home video in careful increments designed to keep these properties evergreen - “The Lion King 3D’’ represents an experiment and a qualified failure.

Has the world been clamoring for the story of Simba to be as visually deep as it is wide? No, but if this re-release of the 1994 neo-Disney classic is a hit - it’s still the highest-grossing hand-drawn animated film of all time - it’s only a matter of time before Ariel, Pocahontas, and Dumbo are comin’ at ya in 3-D. And if it tanks, well, it’s a decent advertisement for the high-def Blu-ray “Diamond Edition’’ of “Lion King’’ due to hit stores in a few weeks.

That may yet be the better bet for young audiences coming to this iconic tale for the first time. Under the aegis of Pixar/Disney Animation guru John Lasseter and “stereographic supervisor’’ Robert Neuman, no expense has been spared in making “The Lion King’’ the best-looking post-production 3-D job to date. The company gets points for trying. But it’s still a post-production 3-D job, and it still doesn’t look quite right.

Take the first scene between Mufasa (voiced by James Earl Jones) and his evil brother, Scar (Jeremy Irons). I found myself concentrating less on what the characters were saying and more on the fact that Mufasa’s snout appears to be on a different spatial plane from the rest of his head. You notice the 3-D rather than be immersed in it, both in close-up scenes with the animal characters and in the vast long shots that were always this movie’s big-screen selling point.

In Pixar’s “Up’’ - conceptualized and created with 3-D in mind from the get-go - the Andean landscapes have a majestic, infinitely gradated depth that registers on your consciousness well after the initial intake of breath. “The Lion King’’ has similar painterly backdrops, but they remain backdrops, with three or four planes of mid-ground and foreground action laid on top. The effect is like flipping through a well-designed pop-up book - interesting and sometimes impressive, but do you really want to be paying extra for it?

Ironically, the least realistic scenes in “Lion King’’ play the best in 3-D, particularly musical numbers like the Busby Berkeley knockoff “I Just Can’t Wait to Be King’’ or the showstopper “Hakuna Matata.’’ And the old Hitchcock “Vertigo’’ trick - the zoom in/dolly out when Simba sees the oncoming stampede - has a nice stomach-churning kick with the added dimension.

Anyway, will the kids care? Not really, and if you don’t mind paying the extra freight, more power to you. But it’s worth noting that “The Lion King’’ hasn’t held up as strongly as some of the other films of Disney’s second golden age. The story line is a Joseph Campbell hero-quest so stripped down to its basics as to become dull, and there’s little of the lyrical freshness, creative ingenuity, and simple heart that marks “The Little Mermaid’’ and especially “Beauty and the Beast,’’ still the high-water mark of the Eisner/Katzenberg era.

Thank God for Nathan Lane, then, whose sardonic meerkat Timon remains the baggy-pants shot in the arm this movie desperately needs. His still-hilarious schtick with warthog pal Pumbaa (Ernie Sabella) almost makes up for the ick factor of the lion love montage between Simba (Matthew Broderick) and Nala (Moira Kelly), scored to Elton John’s “Can You Feel the Love Tonight.’’ In that moment of high 1990s schlock the essential flatness of “The Lion King’’ is revealed, and a thousand digital technicians can’t pop it into relief.

Rated: G (death of a parent)