Infectious thriller: In 'Contagion,' a star-studded cast races to stop the spread of a deadly virus 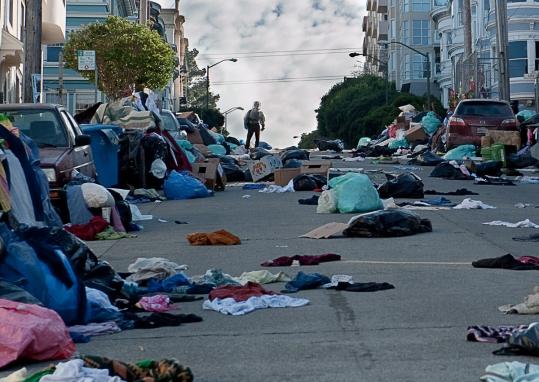 Steven Soderbergh has said that he’s a movie or two away from retirement. He’s only 48, but he wants to paint. This sounds serious, and even if he’s only half-kidding, it raises a major question. Do we want to continue to support an industry that bores an entertainer with as much to offer as Soderbergh?

It’s true that what he offers tends to run wider than it runs deep, but addictive contraptions like “Contagion’’ are the sort of gleaming amusements that it’s easy to take for granted even though they come along only when filmmakers like Soderbergh, Christopher Nolan, and, to some extent, David Fincher, make them.

As a filmmaker Soderbergh requires nothing more of us than a willingness to enjoy ourselves. He had fun. Why shouldn’t we? With “Contagion,’’ the fun begins with a cough. A black screen cuts to the words “Day 2’’ and Gwyneth Paltrow’s raw-looking visage. She’s a businesswoman hacking her way through a romantic phone call in a Chicago airport. Not much later, she’s back home in Minnesota with her husband, Mitch (Matt Damon), and son, looking like death. She had been whooping it up with clients in a Hong Kong casino. Now, she’s just whooping and foaming at the mouth. The news at the hospital isn’t good, and eventually the news on the news is worse. Lots of people in lots of cities are dying of something - it’s not SARS, H1N1, or bird flu.

This setup takes about 40 minutes, and there are so many things to love about it: the shameless pan down to a seemingly harmless bowl of peanuts that Paltrow had been picking at; the way a Hollywood piñata suddenly releases stars like Jude Law as a medical-conspiracy blogger and, playing epidemiologists, Kate Winslet, Marion Cotillard, and Laurence Fishburne to spread the plot around the world; the fantastic under-card actors like Elliott Gould, Bryan Cranston, John Hawkes, Sanaa Lathan, Enrico Colantoni, Demetri Martin’s haircut, and the great Jennifer Ehle, whom I could listen to talk about “viral receptor proteins’’ for the rest of my life; the fact that an entire movie is a kind of joke whose punch line is “Gwyneth Paltrow makes the whole world sick.’’ I don’t know what this woman has done to win the schadenfreude of so many, but Soderbergh has turned her into a 21st-century Veronica Cartwright. When two doctors in protective gear stand over Paltrow, they can’t believe their eyes.

“I want you to step away from the table.’’

“Should I call someone?’’

“You should call everyone.’’

We don’t see what they see, but my guess is it’s the finale of “Country Strong.’’ Paltrow doesn’t get to go quite as bananas as Cartwright in “Invasion of the Body Snatchers’’ or “The Witches of Eastwick,’’ but she’s at least in enough on the gag to deserve the prize for good sportsmanship that she should have won for “Se7en.’’ Most of the glamour goes to Cotillard, who spends the movie in expensive-looking fabrics worn on behalf of the World Health Organization.

Elsewhere, Soderbergh momentarily replicates the jaundiced lighting of the “Body Snatchers’’ 1976 invasion and plays around with 1960s experimental, low-budget camerawork. He’s one of the few directors who could give you a chill simply in devising a montage of people sitting around conference-room tables mesmerized by a big flat-screen monitor. Even when the tension and wit in Scott Z. Burns’s screenplay ventures into international kidnapping, conspiracy theory, and worldwide panic, Soderbergh never loses his cool. Our pulse may rise, but his doesn’t. And that is the downside of the Soderbergh experience. In his big, exceptionally well-made commercial adventures - as opposed to more financially microscopic adventures like “Bubble,’’ “Che,’’ and “The Girlfriend Experience,’’ which are ambitious in different ways - nothing bothers him. The budgets and stars inoculate Soderbergh against having to engage with the greater world. So a movie in which tens of millions of people die is exciting. This is why the Michael Douglas third of “Traffic’’ was such an exasperating comedy. The director’s idea of tragedy played like an anti-drug public service announcement.

“Contagion’’ contains a lot of science fiction but, in one Asian village, the movie leaps into ridiculous moral territory. Seriousness starts to short-circuit the cheap thrills, while in Minnesota, a kind of biblical judgment takes over. Paltrow’s character appears to be an original sinner, whose son from a previous relationship also gets sick. Do good genes keep Mitch and his biological daughter, Jory (a very good Anna Jacoby-Heron), from getting sick, or is it plain old goodness? When Jory’s beau keeps showing up at his house, Mitch’s comical attempts to keep her uncontaminated also feel like a bid to maintain her chastity.

Big ideas and small-mindedness threaten to turn “Contagion’’ into unwieldy world-affairs and family-values allegories, but Soderbergh and Burns are moving too fast to think. Soderbergh’s much better at 100 miles-an-hour, anyway. This the sort of movie the Mexican director Alejandro González Iñárritu (“21 Grams,’’ “Babel,’’ “Biutiful’’) thinks he’s too important to make. For him, Soderbergh’s films must be like the Ikea showroom of movies, all the furniture, none of the work. “Contagion’’ is never not a slick entertainment. Even its glibness is fun, and Cliff Martinez’s electronic score, used sparingly but effectively, sums up the cognitive dissonance of that fun. This is disease you can dance to.

The new flick got us thinking about other pandemic movies that Hollywood has produced over the years.

R (some language, widespread panic, and disturbing images, including the surgical removing of an Oscar winner’s scalp)