Silent film has much to say 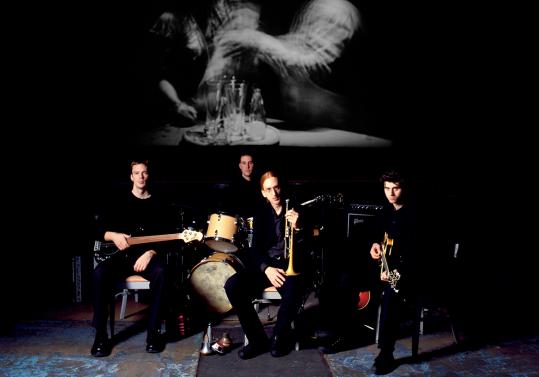 Aaron Trant’s After Quartet (above) will accompany the Boston premiere of “Nathan the Wise’’ with a live performance of Trant’s score for the 1922 German silent. The Sept. 11 screening will take place at the Coolidge Corner Theatre. (Anthony Sanna)
By Loren King Globe Correspondent / September 4, 2011

What does a long-forgotten 1922 German silent film have to do with the tragic events of Sept. 11, 2001? On the surface, maybe not a lot. But the Coolidge Corner Theatre and Goethe-Institut Boston looked deep into the soul of “Nathan the Wise’’ and found a tribute to religious tolerance that, accompanied by a new score that weaves in contemporary American elements, seemed fitting as a way to commemorate the 10th anniversary of 9/11.

“We live in extremely sensitive times; how great is it to get this gift from 1922 as a reminder that good will, mutual respect, and open communication can breach the deepest chasms that divide us?’’ says Elizabeth Taylor-Mead, associate director at the Coolidge.

A major production for the new Bavaria-Filmhaus of Munich the year it came out, “Nathan the Wise’’ was subsequently banned by the Nazis and long thought to be lost. The only existing print was discovered, completely intact, in Moscow by the Filmmuseum München in 1996, filed under the title “The Storming of Jerusalem,’’ after one of the film’s lavish scenes. Restored in 2006, the film has screened only a few times in the United States.

The restored film, shown with English intertitles, makes its Boston premiere at the Coolidge Corner Theatre with an original score by Boston composer and percussionist Aaron Trant. Trant’s After Quartet will accompany the screening with a live performance on Sept. 11 at 11 a.m.

“Nathan the Wise’’ (Nathan der Weise) is based on the 18th-century play by Gotthold Ephraim Lessing. The play is considered an important work in the German literary canon, acknowledged as a “humanist manifesto’’ that defends religious tolerance and the freedom of ideas. Set in and around Jerusalem during the Crusades, it’s about conflict among Muslims, Christians, and Jews, with epic battles and melodrama. A Jewish elder, Nathan (played by Werner Krauss, who starred in the German Expressionist classic “The Cabinet of Dr. Caligari’’) attempts to reconcile leaders of the three religions. The film ends up being a political fable that argues for the equal validity of all three religions, an idea that offended the German censors.

In the aftermath of the devastation of World War I, Jewish producer Erich Wagowski conceived “Nathan the Wise’’ as an epic production about the evils of hate and intolerance and hired 27-year-old Jewish director Manfred Noa to helm the project. Its release in 1922 coincided with rampant anti-Semitism in Munich, fast becoming a Nazi stronghold marked by Hitler’s failed “Beer Hall Putsch’’ in 1923. Even before its release, there were attempts by Nazis in Munich to destroy the negative. German censors criticized the film for its sympathetic Jewish characters, and it seems to have had just one public screening, in October 1930. Noa and the film fell into obscurity and Krauss went on to star in an anti-Semitic propaganda film, “Jew Süss’’ in 1940.

Trant, who lives in Jamaica Plain, says he was asked by the Goethe-Institut Boston to compose a score for the “new’’ film. “Silent films were meant to have music. The films can seem dated and can turn people off but live accompaniment brings the drama back to the film and hopefully opens it up to new audiences,’’ he says. Trant and Brian McWhorter cofounded After Quartet as a jazz ensemble in 1993 while they were music students at the University of Oregon. A campus film group in 1998 approached McWhorter about composing a score for the Fritz Lang silent classic “Metropolis.’’

“We were young and without much experience. We had just one month to rehearse. But once we did it, we were blown away by the result,’’ says Trant. “The visual component to the music was so exciting.’’ After Quartet toured the West Coast with “Metropolis’’ and its members were commissioned to compose music for other silent films, such as Trant’s new score for Buster Keaton’s “The Frozen North.’’ Along with Alloy Orchestra, After Quartet established itself as one of the few ensembles dedicated to scoring and accompanying silent films.

Trant later graduated from the New England Conservatory, where he created a solo percussion score for the acclaimed Chris Marker short film “La Jetée’’ as his graduate percussive recital.

The temptation for silent film composers, when not using the traditional organ, is to rely heavily on strings and piano, says Trant. “German Expressionist, especially, is such an over-the-top style, with a lot of facial and hand motion. I didn’t want to overwhelm the drama. Since we’re dealing with three different cultures, I was thinking about an ethnic sound for each religion.’’ But he soon scrapped that idea. “To tie it closely to the screening on 9/11 and to connect the cultures, I decided to add a fourth element. I composed a score with an ‘American’ sound, including jazz, improvisation, and minimalism,’’ says Trant. The musicians will rehearse while watching the film in order to practice timing and cues.

After Quartet will be a trio for the live performance of “Nathan the Wise’’ with Trant on percussion and vibraphone; Nate Wooley on trumpet; and Scot Fitzsimmons on bass.

As a prelude to the screening, Goethe-Institut Boston presents a free literary seminar on Wednesday from 6 to 7:30 pm. Moderated by Susanne Klingenstein, it examines “Nathan the Wise,’’ which was Lessing’s last work. The main character, the Jew Nathan, was modeled on Lessing’s friend, the philosopher Moses Mendelssohn.

For more information, go to www.coolidge.org/worldgerman.