Anatomy of a whistleblower 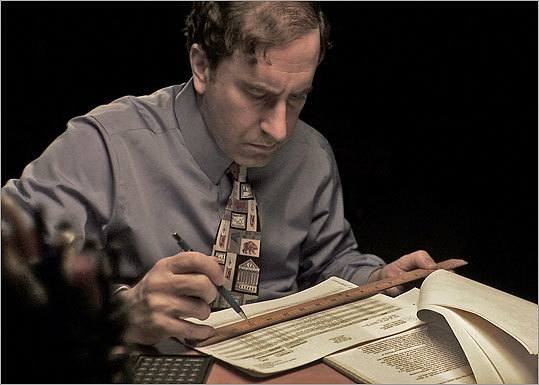 Harry Markopolos, one of those who warned about Bernie Madoff, in "Chasing Madoff." (Julian Van Mil)
By Wesley Morris Globe Staff / August 26, 2011

Harry Markopolos is a terrific subject for a documentary. His rangy build, droopy manner, and general sense of morality excuse his brief forays into self-aggrandizement. When he testified before the House Capital Markets Committee in 2008, there was a riveting blend of “I told you so’’ and “Oh my God, I’m on C-Span.’’ Markopolos is, of course, the former Boston portfolio manager who spent the better part of a decade trying to warn the Securities and Exchange Commission that Bernard Madoff was the mastermind of an enormous financial fraud. Markopolos was given the Cassandra treatment. But along with three other Wall Street insiders - Neil Chelo, Michael Ocrant, and the fabulously ruddy Frank Casey - Markopolos couldn’t let the case go.

The reason he’s ripe for an act of nonfiction filmmaking is because, unlike his fellow whistleblowers, the case appeared to take a psychic toll. It turned him into the sort of sweaty paranoid at the center of a 1970s conspiracy thriller. “Chasing Madoff’’ is mostly that sort of movie, the kind you make when all you’ve seen is other movies and television shows about crime, when you want someone to know what you can do with a juicy story that takes some effort to ruin. The director is Jeff Prosserman, and he appears to be auditioning for some other movie. His documentary evokes those conspiracy thrillers - “The Conversation,’’ “Three Days of the Condor,’’ “All the President’s Men,’’ etc. - a few recent horror movies, the documentaries of Charles Ferguson, PBS’s “,’’ the third season of TV’s “Damages,’’ and a lot of Errol Morris.

The opening sequence features shots of raining cash, blood trickling down an arm, and the sound of flames. There’s also an “and introducing’’ tag and music that nearly self-destructs as it tries to reproduce the antic mischief of a Philip Glass score (so much hysterical fluting in the distance). By the time the words “chasing’’ and “Madoff’’ washed up on screen, I actually reached for a pair of 3-D glasses. Markopolos, Chelo, Casey, and Ocrant sit in a black space and look into the camera when they speak.

I don’t know if Prosserman used one of Morris’s Interrotrons, but the effect is not dissimilar. They’re looking right at us. In Prosserman’s customization and in lieu of a normal cut, a shot of, say, Ocrant discussing a meeting with Casey whips to the right to a shot of Casey finishing his sentence. It’s an iPhone swipe, and it’s clever. But Prosserman douses the movie in about half a dozen other stunts, including hyperactive horror-movie montages, amateurish cutaways to sepia-toned photographs, and old-timey narration. Every so often, some of Madoff’s victims talk to Prosserman - on the street, at a restaurant, in a golf cart. Rather than give their names, these men and women are identified by the account they had with Madoff, “#56-259984,’’ for instance. If the idea is to confer a human face upon stolen money, the face also needs a name. There’s compelling information here but it’s buried under Prosserman’s bold-italic-underline style.

There’s the matter of the many reenactments starring Markopolos. They’re problematic not for any conventional ethical reason but because they seem to contradict Markopolos’s essentially pure nature. Last year, Markopolos released a book about his experience - “No One Would Listen: A True Financial Thriller’’ - and rather than wait for the inevitable Hollywood adaptation, he plays himself. Prosserman films Markopolos taking his twin sons to karate class and lecturing during a nature walk about the difference between a predator and prey.

Throughout, Markopolos insists he’s no hero, that he was understandably depressed that he didn’t stop Madoff in time. The book and film feel like passive-aggressive redemption. He became convinced that Madoff wanted to have him killed, so he’s shown purchasing a gun and visiting a firing range. He mentions that he instructed his wife to start shooting should the SEC break into his home. And, yes, that’s Markopolos in funhouse-mirror black-and-white, doing the old revenge thriller lock-and-load. Markopolos says his boys think Spider-Man is cooler. “Chasing Madoff’’ should change that. Chicken Little just turned himself into Charles Bronson.

CHASING MADOFF Written and directed by: Jeff Prosserman, adapted from Harry Markopolos’s “No One Would Listen: A True Financial Thriller’’