Where playing with your food makes you famous 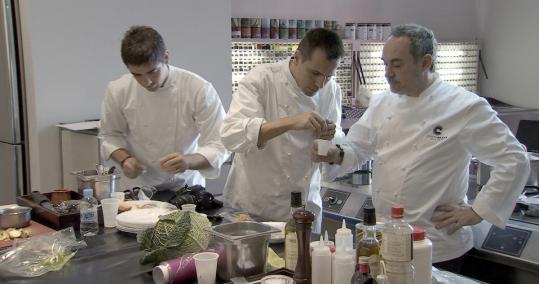 Just so it’s clear who the stars are in Gereon Wetzel’s documentary “El Bulli: Cooking in Progress,’’ the film ends with close-ups of food. Tangerines in oil and little nuggets of ice. Pine nut cream with gin. Bone marrow tartar with oysters. Water, oil, and salt (with an infusion of happenstance). Pumpkin meringue on a tiny roll. This is food as deeply photogenic as Elizabeth Taylor or Halle Berry. It can be prepared with xanthan gum, algin, colorants, and emulsifiers. It can be vacuum-sealed or concocted in a cotton candy machine. And as of the end of July we can no longer have any of it - not the El Bulli way. Not that that was ever easy to experience in the first place.

The restaurant is a house of haute architecture nestled among the rocks and stones of the Spanish coastal town of Roses. It typically feeds about 8,000 people during the six months it’s operating. But in some years, as many as 2 million people have tried to get in. The restaurant began in the early 1960s. Its current chef, the Catalan Ferran Adrià, arrived in the 1980s, won the restaurant two of its three stars, then won himself a kind of international pop-intellectual fame akin to that of Steve Jobs or Frank Gehry. Adrià helped change the world’s understanding of how else food could taste.

In July, the restaurant closed. In 2014, Adrià will reopen it as the gastronomical think tank that Wetzel’s movie already believes it to be. The movie, which opens tomorrow at the Museum of Fine Arts, shows that Adrià conceives his menus the way some fashion designers build collections: from a single idea. We catch him in what he calls his year of water.

Wetzel and his crew watch with absurd patience as Adrià’s staff perform experiments in a Barcelona laboratory, then take those experiments south to the restaurant. They chart, diagram, post, and photograph their work. Adrià arrives in chef’s whites to deliver verdicts. We can see science at work. But it’s vague, since we can’t know every additive and gadget. We also can’t know how any of the trials taste. It’s a lot of process for us, yet not too much for us to process.

Someone’s hard drive dies and takes with it a bunch of pictures, and Adrià boils over. Oriol Castro, the head chef at the restaurant, says the tests and results are on paper. But Adrià wants pictures. Without those, what’s the point? Later, he tells the restaurant staff that creativity and production aren’t the same. He’s as much a director, apparently, as he is a chef. And you come to appreciate his humorless perfectionism even after you’ve caught him looking at Wetzel’s cameras and maybe turning up the heat on his ego. He wants his staff to share his integrity. He could rest on El Bulli fame but part of what makes him great is that he can’t. There he is on the season’s opening night leaning on a countertop, steeling his nerves while, upstairs and outside, diners mill around the rocks. A shot like that says that Wetzel and his crew know just what to do with all their access.

Wetzel’s challenge is to film the experiments so that the process itself is legible. We’re made to marvel at slow-cooked, freeze-dried, unappetizingly bagged food, the way some mushrooms, when delicately sliced, evoke fruit and some crustaceans resemble side-sleeping snooze-bar slappers.

Wetzel’s studied approach is only right for a man as openly preoccupied with form as Adrià. He captures the mincing, bagging, testing, tasting, and alchemy of food that may or may not make it to the table. With no commentary, Zen-like patience, and a chiming score that implies something being hatched, Wetzel chronicles the restaurant’s transition from glamorous dining destination to a food laboratory where the chefs are also scientists, monks, and artists. The movie mines poetry from procedure.

The visual representation of what we eat and the processes by which it’s been made has drifted so far from the El Bulli laboratory. The Food Network, for instance, is all action and personality. It’s distinctly Hollywood. The movie reconsiders cooking according to the concerns of certain European art-house existentialism: What is this sweet potato? Adrià knows. It can be anything.