Stuck in a sexless movie relationship

Since Harry met Sally, things have sure cooled off 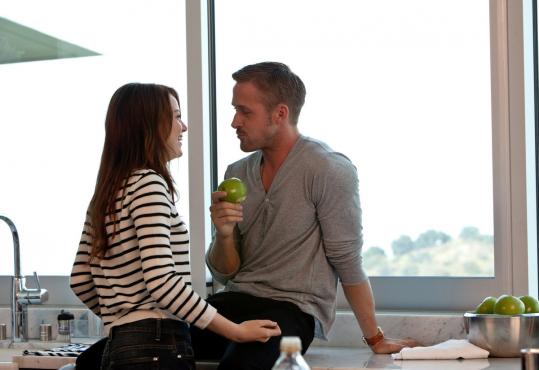 Emma Stone and Ryan Gosling costar in “Crazy, Stupid, Love.’’, a movie about a sexoholic that doesn’t actually have a lot of sex in it. (Ben Glass/Warner Bros. Pictures)
By Wesley Morris Globe Staff / August 7, 2011

I mean sex that doesn’t have to apologize for itself by turning into chocolate or betrothal or a Katherine Heigl movie. I mean the sex a lot of us have had - loveless or awkward or mind-blowingly hot. When Hollywood promises “no strings attached’’ or “friends with benefits,’’ it’s lying. There’s always a string dangling the obligation of commitment. This has been true since Hollywood established a moral production code in the 1930s, and the moralizing quietly persists.

In the best scene in “Crazy, Stupid, Love.’’, a kind of epic romantic comedy that opened recently, a montage stars Ryan Gosling whisking away a dozen or so different women. It’s a breezy, elegant little riff. Implicit in it is sex. We never see what goes on with the many women we’re led to believe he transports to his bed. Until, of course, we do. Gosling can’t stop thinking about one woman - Emma Stone. She tells him to take her to his place, he does, and this time we follow, only to discover that his big move involves not the removal of his pants but the reenactment of a scene from “Dirty Dancing.’’ Women love it, he says. That’s true: many do. But this means that he’s been having sex within the quotation marks of another movie. Of course, that night, he does not have sex with Stone. He laughs and talks and falls asleep. It’s cute. It’s sexy. But, alas, it’s not sex, in a movie at least 25 percent about a sexoholic.

I don’t object to “Crazy, Stupid, Love.’’ I rather like it in its light, juvenile way. It just arrives in another year in which sex is either a shameful, embarrassing thing or deviancy to be conquered by love. If you squint, it could almost be 1937. You don’t want to blame Nora Ephron for this, but Nora Ephron is strong, wise, and well-compensated. It’s her fault, and she can handle it. Ephron wrote the most important American movie about a man and woman made in the last 40 years. “When Harry Met Sally’’ looms larger than “Annie Hall.’’ It’s greater than “Titanic.’’ It’s more devastating than “The English Patient,’’ “Cold Mountain,’’ and “Ghost’’ combined.

Ephron was surveying the landscape of American movies at that point in the 1980s - a blindfolded Kim Basinger eating whatever Mickey Rourke feeds her in “9 1/2 Weeks,’’ Anne Archer shooting Glenn Close in the heart at the end of “Fatal Attraction,’’ Kevin Costner making room on a kitchen table so he can put Susan Sarandon on her back in “Bull Durham’’ - and saying, I can’t see Gable and Lombard doing any of this. Released in 1989, “When Harry Met Sally’’ is both about why it’s not 1937 anymore and mad that it no longer can be. Its modern old-fashioned sensibility has proven appallingly timeless. So has its premise that a straight man and a straight woman can’t be friends without turning hot for each other. Meg Ryan’s fake-orgasmic aria was a black hole into which went serious - or at least sincere - screen sex. By the start of this century, it was virtually reduced to a gimmick or a joke. What else is “Bad Teacher’’ but a gag on what a gold-digger Cameron Diaz is? And even then, the movie is too meek to see the gag through.

Very few screenplays on the subject have been as direct, concise, and sharp as Ephron’s. But “When Harry Met Sally’’ ruinously haunts the most thesis-driven romantic comedies and the most brain-dead. That movie and two more hits that Ephron directed and co-wrote - “Sleepless in Seattle’’ and “You’ve Got Mail’’ - were about how the romance has gone out of romantic movies. And simply through casting, so did the sex. In the 1980s and the 1990s, most stars had memorable sex scenes - Kathleen Turner, William Hurt, Michael Douglas, Melanie Griffith, Denzel Washington, Demi Moore, Harrison Ford, John Malkovich. Tom Hanks and Meg Ryan really were Jimmy Stewart and Margaret Sullavan, stars you liked rather than stars you lusted after.

Sex made Sharon Stone a star, and though you could argue that her timing was unlucky because she was in her 30s when “Basic Instinct’’ came along, her career stalled so fast because the pure eroticism she offered had dried up, and she wasn’t a woman with a solid plan B. Julia Roberts became a star the year before, and she was the girl next door to Stone, a non threat, strong but willing to be in need of a man’s financial assistance. The point of Roberts was somewhere south of erotic, and the shadow she cast is still with us. It would take an endless supply of Ryan Goslings to turn Emma Stone into Sharon Stone. Meanwhile, Angelina Jolie is too much of a goddess, at this point, to be touched and the movies too determined to be all things to all people to risk the sort of contact that turns PG-13 into R. As for the men? We don’t make many, anymore. We’re now a cinema of dudes, guys, and George Clooney. You’ve seen “Horrible Bosses.’’ The men are running from Jennifer Aniston. A woman’s function in most American movies is to confirm a man’s heterosexuality more through propinquity than participation. She’s a Kinsey scale with breasts.

Last year, a New York magazine story famously chronicled a subculture whose males would rather sit in front of their computers than have sex with their girlfriends. The movies are always looking for social trends to laugh at - that’s how we get comedies like “Failure to Launch,’’ “I Love You, Man,’’ “Friends With Benefits,’’ and last year’s underrated “Going the Distance.’’ It was refreshing to hear Justin Timberlake and Mila Kunis explain to each other how much they like to be pleasured in “Friends With Benefits,’’ a fun movie that ultimately feels obligated to make its lovers fall into a big vat of love. It’s not as big a vat as the one Tom Hanks and Julia Roberts spend “Larry Crowne’’ sinking in. The movies don’t have a less sexual star than Hanks. As he presses his face into Roberts’s at the end of that movie, I just mentally cut away to Ryan moaning in Katz’s deli. I was having what she had.

The summer’s most apt statement about what’s wrong with us and with sex at the movies is also the most depressing. It’s Errol Morris’s documentary “Tabloid,’’ which has a high time laughing at the exploits of Joyce McKinney, a beauty queen from North Carolina who became notorious in the 1970s for an escapade with a man whom she might have kidnapped and raped (I don’t think we’ll ever know the truth, but he became known as the “manacled Mormon’’).

The movie manages to tell the story of a woman who appears to have repressed or hidden her exotic sexual past to focus on her pursuit of a purer storybook romance with an unattainable man of God. It’s a strange and shocking 90 minutes, both for what the movie documents and how it does so. Which is to say that it’s also the story of the movies now. McKinney looks into Morris’s camera with real anguish, while the director spends the film flashing news clippings and images that compare her to a vampire, Jekyll and Hyde, and a vagina dentata.

As things go from farce to tragedy, nearly every man in the film is sheepish about sex, including Morris. They laugh or make a joke at this woman’s expense. She’s the baddest teacher, the most horrible boss. The biblical metaphors envelope her. She’s Adam, Eve, the apple, and the snake. Morris’s saving grace is that McKinney is as shameless as he is. We might be a different story. Another movie has kicked us out of Eden, feeling guilty as sin.

Wesley Morris can be reached at wmorris@globe.com. Follow him at www.twitter.com/wesley _morris.