Cowboy and alien encounters of the third kind 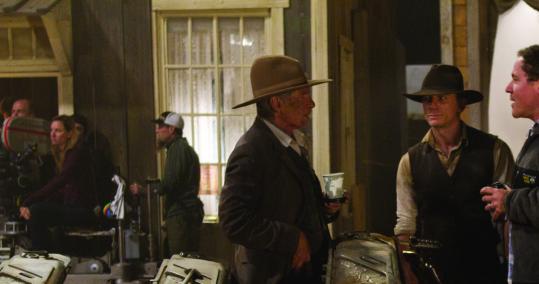 “Cowboys & Aliens’’ is a title that says either “All the other ideas were taken’’ or “What took them so long to take this one?’’ It’s based on a graphic novel punning on cowboys and Indians. But that news seems beside the point if you’ve seen the trailers of this Jon Favreau movie in which Harrison Ford and Daniel Craig do a lot of Wild West scowling while the effects department bathes them and Olivia Wilde in extraterrestrial light. The so-called cowboys will battle the aliens with rifles and facial hair. Wilde presumably has other weapons. And when the movie opens Friday, we’ll be confronted once again with questions possibly bigger and more important than the movie itself.

What on earth (other planets, too) is a Jon Favreau movie?

I’ve seen them all, yet I don’t quite know. There’s so much going on in his two “Iron Man’’ installments that, as hard as he clearly worked to pull them off, you feel his touch only in the banter and parrying among the actors, of which he’s one. This isn’t so much a matter of not really understanding the intricacies of applying fractal landscapes and fluid dynamics to Robert Downey Jr. - although who am I kidding: I don’t. It’s a matter of knowing that my favorite thing about Favreau’s acting is the self-deprecation of his comedy.

The first movie he directed was “Made’’ (2001), an odd-couple caper in which he frequently rolled his eyes at Vince Vaughn, as he also had in “Swingers’’ (1996). Before Matt and Ben there were these two, and like them they don’t work together enough. Vaughn’s obnoxiousness brings out soft exasperation in Favreau, a big, thickly built guy who’s managed to empty himself of the machoness that his costar likes to tinker with. Vaughn loves himself more than he does anyone else. Favreau loves everyone more than he does himself. The relationship’s power dynamic bugs him, but he can’t let go.

When that clash of egos comes through in the “Iron Man’’ movies and in the bearable patches of “Elf,’’ you’re in good hands. Favreau knows how to make self-esteem funny. A larger scale tends to push that skill into the background and the movies become generic entertainments. This is to say that action might not be his strong suit. So when reports suggested that Favreau seemed hurt that, based on the trailers, we all thought “Cowboys & Aliens’’ was a comedy, I started to worry.

Can the western withstand this?

If the western can survive “Bad Girls,’’ “The Postman,’’ and “Jonah Hex,’’ it can handle anything. Michael Crichton declared it was an amusement park attraction in “Westworld,’’ the movie in which we learned that Yul Brynner’s gunslinger was just a robot set on automatic kill. That’s also pretty much how I would describe “Wild Wild West,’’ from 1999.

This is an elastic genre that can be and do whatever a movie says it is. In 1966, the hilariously prolific William Beaudine said it could do horror. That year, he released “Billy the Kid vs. Dracula’’ and “Billy the Kid Meets Frankenstein’s Daughter.’’ Those were the last two of the scores of turkeys he made. If nothing else, he was a visionary of self-explanatory genre collision.

“Cowboys & Aliens’’ sounds like “Freddy vs. Jason’’ and “Alien vs. Predator’’ writ large. That it opts for an ampersand rather than a “versus’’ indicates massive extra-value. This is a big-box blockbuster that wants us to know we’re getting a sick deal. Why sit through a whole Roland Emmerich movie, then an entire Budd Boetticher picture, when you can watch both at the same time. To hell with waste. No, you don’t need 48 rolls of toilet paper, but Jon Favreau’s giving it to you, anyway. While we’re on the subject . . .

Have two franchise stars ever teamed up for a new potential franchise?

I don’t even know, but look: more value! It’s true the better title would be “Indiana Jones and James Bond Defeat the Space Invaders That the Trailers Won’t Let Us See.’’ Wouldn’t that one warm Beaudine’s heart? But to be fair (part one): Daniel Craig doesn’t look like the Spy Who Loved Me here. He looks like he’s on his way to Kenny Chesney night at Rawhide Western Town and Steakhouse at Wild Horse Pass. And good news: Harrison Ford finally gets to be Tommy Lee Jones. Meanwhile, do we know the difference yet between a Megan Fox and an Olivia Wilde? None of my android field manuals is very clear. A friend who knows these things claims that Wilde is “the one you’d stick a straw in on a hot day.’’ I’m much closer to this man’s wife, but that observation does bring us here - to be fair (part two): “Cowboys & Aliens’’ fits better on a Slurpee cup.