'Another Earth' presents worlds of possibilities 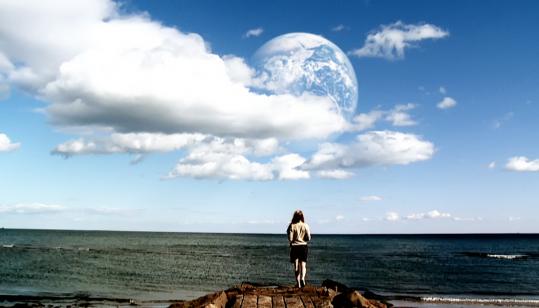 “I was 17 when I got my acceptance letter to MIT,’’ says Rhoda Williams, played by Brit Marling, in the opening voice-over of “Another Earth.’’ Five minutes later, driving drunk after a party and shocked by the sight of a duplicate Earth, she slams into the car of John Burroughs, killing his wife and son. Four years later, after her release from prison, Rhoda begins working as a custodian at her old high school. She seeks out John, played by William Mapother, from “Lost,’’ to apologize. Instead, she ends up inadvertently befriending him without revealing her role in their joint tragedy.

“Another Earth’’ was a surprise Sundance favorite this year, taking home the Alfred P. Sloan Prize for the best film on themes of science and technology. Fox Searchlight bought the film for over $1.5 million. It opens here Friday.

“We all have these idealized pathways,’’ says director Mike Cahill, explaining the concept behind “Another Earth’’ during a Q&A after a screening earlier this month at the Coolidge Corner Theatre, “and sometimes your life takes a radical shift. If those two versions of yourself, the one that went down the ideal path and the one that did not, sat down together, it’s not so obvious, necessarily, which one had the better life or the more profound existence.’’

The film’s other Earth introduces the possibility that Rhoda could meet an ideal her, with her radical shift erased. Cahill got the idea by listening to audiotapes of a book by Richard Berendzen, director of NASA’s Space Grant Consortium. (Cahill eventually recruited Berendzen, whose voice he describes as “Darth Vader meets God,’’ to be the film’s science consultant and narrator, as well as to play a scientist character.)

Says Cahill, “We derived a lot of inspiration from science. We were interested in string theory, the idea of parallel universes, and the multiverse. But we bent all those things for metaphor.’’

In a sense, Cahill, 32, and Marling, 28, themselves chose to take the path less idealized. Marling, pretty enough to land superficial roles playing dumb blondes, speaks with intelligence and intensity, her sentences seeming to gain momentum each time she adds an “and.’’

An economics and studio art major at Georgetown, she took a year off after an internship at forced her to question her direction. “It became obvious to me that at 45 I would technically have done everything right but also not have lived,’’ she says on a recent visit to Boston to promote the film.

So she escaped to Cuba to work on a documentary called “Boxers and Ballerinas,’’ the brainchild of Cahill, whom she had met her freshman year.

She describes her first impression of him: “I went to a film festival [at Georgetown], and the films were all really bad. And then at the end this amazing short came on and it was colorful and poetic and the ideas were complicated and it was rhythmic. And so it wins first place, and, you know, these guys get up to accept these awards and it was Mike and Zal [Batmanglij] and they co-directed it together and I was like, ‘I gotta figure out how to be friends with these guys.’ ’’

(Batmanglij directed Marling’s other Sundance film, “Sound of My Voice.’’)

Cahill was also a Georgetown economics major. He has worked as a cinematographer, producer, and editor at National Geographic, as a documentary filmmaker, and as a video artist. Something of a free spirit, he has long hair and penetrating eyes, making him look like a cleaner, more modern Jack Sparrow. His voice is mellow and sarcastic, and he grins with warmth and a hint of mischief.

Marling says she has come to particularly respect Cahill’s independent perspective. “There’s this feeling [in Los Angeles] that you have to wait for permission to make your work. You write a screenplay, you give it to people - ‘Will you give us money?’ - you’re always waiting for someone to say yes and,’’ she pauses, “[expletive] waiting for people to say yes.’’

In the spirit of doing rather than waiting, Marling and Cahill took on writing and producing the film themselves, with Cahill also acting as cinematographer. According to Cahill, since they already had an idea and the skills, he knew “We don’t need anything. We don’t need permission. We can make this movie for $3.’’

The actual final product cost “well under $200,000.’’ In order to obtain the shots he needed for little or no money, Cahill employed stealth tactics. Marling walked into a prison with a yoga mat pretending to be a yoga instructor so that he could shoot her walking out (after she had dumped the yoga mat) as Rhoda leaving prison. Instead of booking a train for scenes set on a commuter rail line, Cahill purchased tickets for himself, Marling, and 10 extras and they rode back and forth over the same section, while Cahill cradled a handheld camera.

Cahill chose to film in his hometown, New Haven, where he could rely on the help of friends and family. A police officer he knew closed down a street so that he could film the car crash scene in the middle of the night. He used his childhood home as the setting for Rhoda’s home. His childhood room was Rhoda’s room.

The bare-bones budget also affected the film’s aesthetic. “There are a bunch of shots,’’ Cahill says, “where the camera shakes and lifts up and you see this other Earth and something about that embeds this feeling of realism to it. It makes it just a pinch more authentic than these grand, sweeping tracking-dolly shots.’’ He pauses, adding with the straightest face he can muster, “Which we totally could have afforded if we’d wanted to: I chose not to.’’

Like Rhoda, both Marling and Cahill have landed on a trajectory they never expected, albeit a far more pleasant one than hers. Says Cahill, “We made this film thinking we were going to show it to our 10 closest buddies.’’ Instead, they’re hurtling toward the stars.