Queen of the Sun: What Are the Bees Telling Us?

‘Queen of the Sun’ documentary a real bee movie 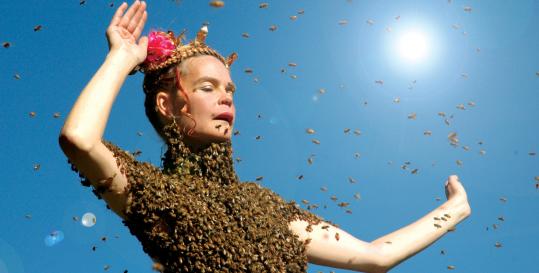 Humans have been keeping bees for 10,000 years. The last few have been the hardest. The incidence of colony collapse disorder has risen dramatically in Western Europe and, especially, North America. CCD is a phenomenon where bee colonies suddenly die off. This concerns not just entomologists and beekeepers, but the rest of us, too. As the author Michael Pollan says in the documentary “Queen of the Sun: What Are the Bees Telling Us?’’ “We depend on the honeybee to pollinate 40 percent of our food, a tremendous amount of what we eat.’’

Or as an English beekeeper with hives on his London rooftop says, “If we don’t protect them, then we’re not protecting ourselves.’’

Taggart Siegel’s documentary loves bees, and there’s much footage of them pollinating flowers, swarming over honeycombs, and the like. “I start to see the flight of the bee like a golden thread in the landscape, from flower to flower,’’ says another talking head, Johannes Wirz, a molecular biologist, and you can see why. It’s a lovely quote, but not as good as Pollan’s observation that “Bees are the legs of plants.’’

Some of the information “Queen of the Sun’’ imparts is fascinating. Who knew that there was such a thing as migratory beekeeping or that three-quarters of all US bees are trucked to the West Coast every February to pollinate the California almond crop?

The reason farmers need to truck in bees is monoculture: the growing of a single dominant crop, such as soybeans in Iowa or those almonds. The whole point of pollination is that the golden thread zigzags, going from one variety of plant to another. No variation, no bees.

The growth of monoculture is among the reasons suggested for the explosion in CCD. Others are disease, genetic modification of plants, and pesticides.

Chemical pesticides were developed from materials used in warfare, a scientist tells us, materials used to kill people. While she’s saying this, Siegel cuts to stock footage of World War II planes (worse, Allied planes) dropping bombs. Such heavy-handedness is typical of “Queen of the Sun.’’ Its bland self-righteousness can flirt with comedy. The movie begins with an expressive dance by a woman largely covered in bees. People dressed up as plants and bees perform a kind of pollination play in a church. Footage of another play shows a (human) queen bee trapped in a cage. There are also snatches of pretty lame animation. The several scientists and organic beekeepers heard from look quite good by comparison

What we don’t get in “Queen of the Sun’’ is anyone suggesting there might be some merit to how agribusiness is conducted. Awful as it is, it does feed an awful lot of food to an awful lot of people at awfully affordable prices. The first step in getting beyond preaching to the converted is letting the other side show how wrong it might be. No matter how nutritious, intellectual monoculture benefits from pollination even more than the agricultural kind does.

QUEEN OF THE SUN: What Are the Bees Telling Us? Directed by: Taggart Siegel