‘Mia’ is visually beautiful but message-heavy 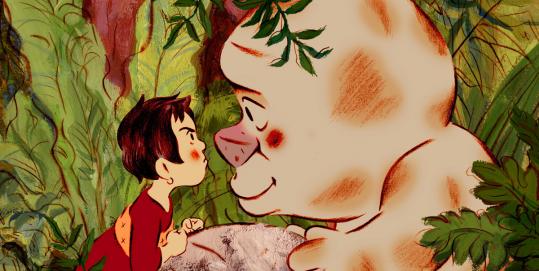 Five hundred thousand luminous drawings and a dud script fight each other to a standstill in “Mia and the Migoo,’’ a French animated family film opening at the Museum of Fine Arts today. The MFA has previously brought area audiences such cutting-edge cartoons as “Azur and Asmar’’ and “Sita Sings the Blues,’’ works where the level of storytelling invention matches the rapture of the visuals. By contrast, Jacques-Rémy Girerd’s ecological fantasy adventure is so heavy-handed that only the youngest audiences won’t feel talked down to. Instead, they’re likely to be freaked out.

Did you know that developers who want to build condos in the South American rain forest are bad? I mean, really bad? The villain in “Mia and the Migoo’’ is a white-suited thug named Jekhide (voiced by John DiMaggio in this English-language dub) who cares little about nature and less about his construction workers. He’s the kind of fellow who can visit an illegal arms dealer and say, “Breathe in that fragrant gunpowder! That’s the smell of strength, of brute power!’’ In case you were wondering what side he was on.

Somehow, Jekhide has a young son, Aldrin (Vincent Agnello), a boy as pure-hearted as his dad is plain mean. They chopper into the site of the developer’s latest project — a luxury hotel on the edge of a lake with a magic tree in its center — at the same time that a plucky young girl named Mia (Amanda Misquez) arrives over the mountains by foot, intent on finding her father (Jesse Corti), who’s buried under a pile of rubble.

The mysterious disasters plaguing the construction crew can be traced to the Migoo, a size-shifting tribe of woodland protectors who look like ancient golems and talk in the voice of Wallace Shawn. Mia befriends and is taken in by them, which leads to a fiery end-of-the-world climax that plays like an ungainly mix of “Avatar’’ and a Hiyao Miyazaki movie. The Migoo themselves are very much lesser Totoros.

The English-language script exacerbates what was a boilerplate eco-fable to begin with, and Jekhide is such an overbearingly nasty piece of work that his final change of heart barely makes sense. Vocal cameos by Whoopi Goldberg, James Woods, and coproducer Matthew Modine don’t add much, either.

Where “Mia and the Migoo’’ triumphs is in the art department alone, with rich brown charcoal outlines, majestic pastel washes that give depth to the landscapes, and riotous colors that are more vivid than the story line. Echoing Van Gogh, Kahlo, and Cezanne, the film’s individual frames deserve to be enshrined in a coffee table book or on the walls of a museum. Seen in rapid succession on a movie screen? Oddly, they’re less than the sum of their cels.

At: Museum of Fine Arts, today and various dates through June 23.